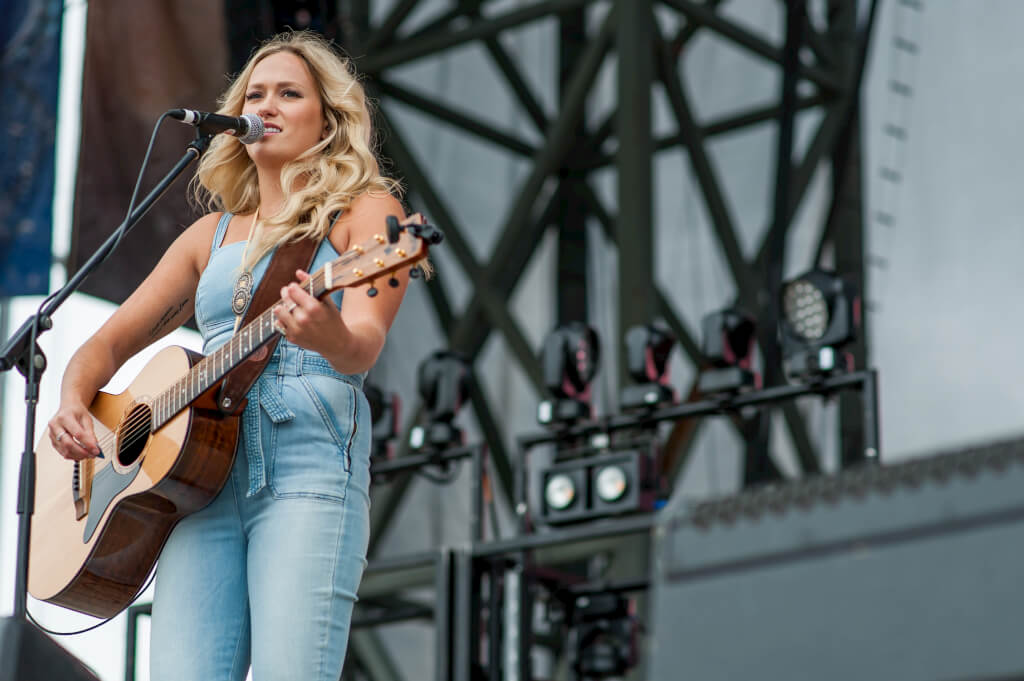 The Daily Musician’s own Sarah MacDonald had the chance to chat with rising stars, Meghan Patrick and Jason Benoit as well as returning Cavendish Performer Tebey at the Cavendish Beach Music Festival. Here is what each of them had to say.

SM: What has the fan reaction been since the release of “Grace and Grit?”
MP: So far, it’s been great! I’ve been getting lots of positive feedback. It’s been a slower burn since “Bow Chicka Wow Wow” but I think I am gettig a lot of great feedback about the record, so it’s all good.

SM: Desribe what it was like to work with the likes of Vince Gill and Chad Kroeger?
MP: It’s really what you would expect. With Chad it was surprising – not that I didn’t think it would be good. I didn’t realize just how much he loves country music. He’s just an all-around great writer, so I learned a ton from him.Working with Vince Gill was a dream come true. He’s one of the sweetest, kindest, and most talented people I’ve ever met and I’d love to collaborate with him again in the future.

SM: So your sound is very traditional. Was that your goal going in, given the state of country music’s current pop trends?
MP: Absolutely, and it’s not to hate on pop-country at all, it’s just not where I want to go. I think there’s a place for what I want to do and I think people will want to hear some more of that. Getting into the more traditional sound.

SM: What’s in store for you for the rest of this year?
MP: We’ve got lots of festivals coming up, which I am really excited about. Lots of performing. I’m going to get back to writing some more, and start to think about the next album!

SM: You’ve had an incredible year since your last visit to the Cavendish Beach Music Festival! That me through what’s been going on!
JB: Oh wow, well November of last year I went on tour with Cold Creek County and Tim Hicks, so that was incredible. We went out for a month all across Canada and that was an experience in itself! After that we’ve been doing shows pretty much all over Canada. This summer has been really busy with a lot of festivals, and here I am at Cavendish Beach Music Festival, this year on the main stage, so it’s just incredible!!

SM: I was in the crowd watching your set earlier and I saw lots of people singing along with your songs. What does that feel like to experience?
JB: It’s amazing. Just to see a song that I’ve written and released have that much of an impact on people. It means the world to me. That’s why I got into it. It’s shown to me that the fans are into it, which is amazing! It’s more than I could ever ask for.

SM: Let’s talk about “Waves” for a minute. When you were writing the song did you find it particularly difficult, or more theraputic to finish?
JB: It was definitely theraputic. My dad passed away couple of years back, and that’s pretty much why I write it. It was a year after he had passed away that I wrote it. It was very theraputic. I love that song, and it has a very special place in my hear because of that.

SM: You also have a new single coming out at the end of the month?
JB: Yes! It’s called, “All Wanna Party!” and it will be released on July 27th on radio and iTunes so everyone check it out!!

SM: Are you working on a full-legnth album?
JB: Yes! It should be dropping out in the fall. We don’t have an exact release date, but it’s going to be called “Waves.”

** Be sure to check out iTunes July 27th for Jason’s newest single, “All Wanna Party!” Also, stay tuned to The Daily Musician for updates on Jason’s full-legnth release of “Waves” to be released this fall!

SM: Welcome Back! You had a wonderful time here the last time you were here!
T: Yeah, We’re going to be here tomorrow as well just hangin’ out!

SM: I spoke earlier with JoJo Mason who reminded me a lot of you when we spoke the last time you were here. Full of excitement and totally enthusiastic. Are you happy to be back?
T: I’m super happy to be back! The last time I was here, there was like 16,000 people that turned out to watch us play! It’s always great.

SM: I read that you recently returned from a tour overseas to sing for the Canadian troops. What was that like for you?
T: That was incredible! We got to go to Kuwait and play. It was really cool. It was a really trip – like two days, but well worth it to see the look on those guys faces. The goal there is to take them out of the every day. They’re often there for months at a time away from their famlies. It was great to go over and play some music for them and take their mind off things.

SM: Was that the first time that you had done something like that before?
T: No, it was actually the second time. Two years ago, I actually went over to Israel with Emerson Drive, and we did a similar thing there.

SM: So, you’ve done a lot of writing for other artists, in addition to the music you write to perform yourself. Is there anything that stands out in your mind that you’re particularly proud of?
T: Wow. Working with One Direction was pretty cool, just because of the magnitude of that band, I mean they’re international superstars. Recently, I got a song on the new Justin Moore record, which is awesome because I went from both ends of the spectrum from working with a pop boy band to working with a real country artist, so that was pretty cool. I was really excited about that.

SM: What’s the fan reaction been to “Lightweight?”
T: Good!! We’ve only played it out once, so we’ll play it today for sure.

SM: I love asking this question to songwriters – who are your main artistic influences?
T: I’m a HUGE Chesney fan! I love Adam Levine, and Maroon 5. I really listen to everything. I think that’s where the typical fan is at these days. Fans don’t JUST listen to country music – they listen to a little of everything. That’s why I think you see a mishmash of genres. Just look at Sam Hunt, or Old Dominion. It’s a really interesting time for country music.