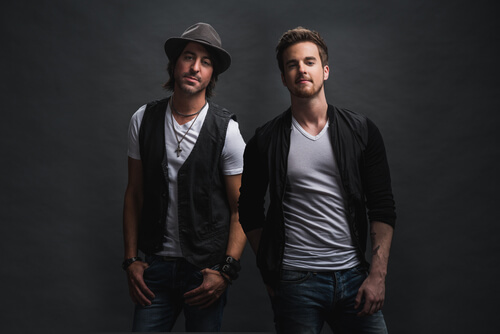 Sarah: Thanks so much for taking the time! How did you guys enjoy CCMA
Music Week?

TSC: It was incredible, and so much fun – maybe a little too much fun, haha!

Sarah: Did you find this year to be different than other years you’ve
attended?

TSC: Yeah, I mean each year’s different in its own way. It was great
because each year we went we got to meet new people, and at the same time
rekindle old relationships.

Sarah: Did you guys have any particular favorite moments? I know you guys
had a pretty tight schedule during the time you were in London.

TSC: I thought what Brett Kissel did at the Awards show at the arena was
amazing. It just about made me cry and was definitely a special moment. We
were right in the front row for that. The song itself is great (the song
he is referring to is “I Didn’t Fall In Love With Your Hair”) then when he
started calling all of the women out and they came onto the stage, I was
like “You’re Kidding!” It was just incredible and such a powerful moment.
Other than that I love everything about music week from the 6am rises to
the 3am go to beds! Haha!

Sarah: Anything exciting in the works for the future? I know you guys had
a pretty packed schedule as of late.

TSC: Yeah, we’re actually working on a full-length album right now. We’ve
been recording it over the last 6 months, or so. It’s kind of getting down
to the wire right now, so that’s kind of the main focus at this time.
Obviously different things like the CCMAs come up and kind of get in the
way a little bit, but we’re back at it now and all geared at finishing it
up.

Sarah: Are you guys gonna be doing some extensive touring?
TSC: As soon as we release the first single from the album, we’re probably
gonna be looking at some radio tours to kick things off. After that we
really want to head East and expand our touring because we play so much in
the West that it would be so great to come East and tour there.

Sarah: We would love to have you!! I think you guys would be a perfect fit
for playing Cavendish Beach Music Festival in July!

TSC: Oh yes!! That would be such a blast! We’ve heard so many amazing
things about that festival and next year we will definitely get a push on
to get to play there.