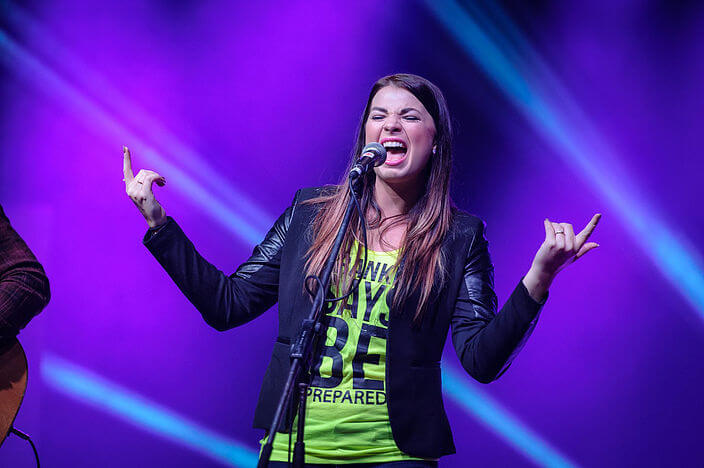 Sarah had the chance to catch up with reigning CCMA Female Vocalist of the
Year – Jess Moskaluke! They touched on her latest album, “Kiss Me
Quiet.”Her latest single, “Elevator,” a possible new album, and even plans
of returning to the East Coast this fall!

Sarah: “Elevator” is your most recent single, and your third from “Kiss
Me Quiet.” What has fan reaction been for the single and the album since
the release?

Jess: Luckily I have been able to read the fan’s reaction on “Elevator”
since before its radio release since we have been playing so much this
summer. It’s been fantastic. It’s amazing to see their energy level
increase when that song rolls around!

Jess: Wow, I’ve been so fortunate that this question is almost difficult
to answer! I would have to say that the 2 CCMA Awards for Female Artist of
the Year were a highlight, as well as picking up some Juno nominations.
The When the Lights Go Down tour with Chad Brownlee and Bobby Wills was a
highlight, as was the Road Trip tour with Paul Brandt and Dean Brody. What
a whirlwind!

Sarah: With CCMA Music week just around the corner, you must be so
excited. What are your plans while attending?

Jess: Yeah I’m pumped; it’s always such a busy weekend! As for plans,
that’s kind of a loaded question. There’s just so much going on it would
be tough to make a list here’ I plan to stay as calm as possible and not
miss anything, I guess! Haha!

Sarah: Speaking of CCMA, you’re nominated once again for Female Vocalist
of the Year after winning the honour the last two years! Take me through
what that means to you.

Jess: Honestly it is so cool just to have been nominated. I know everybody
says that, but they say it because it’s true. It never, ever gets old to
have someone give you a pat on the back because they think you’re doing
something right.

Sarah: What are your plans for the fall? Any plans to return to the East
Coast in the near future?

Jess: Yes! We will be in Halifax on September 16 actually for a college
gig. We are still on the road like crazy until October, but after that I’m
hoping to get back writing and maybe even into the studio.

Sarah: Do you have set plans for the New Year? A new record perhaps?