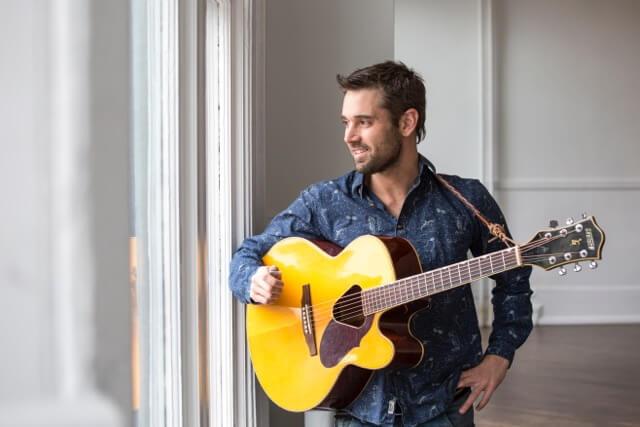 Blending the nostalgia of classic country music with modern satire, Ryan Cook has developed a progressive sound both traditional and innovative. Leaning on the sounds of Western-swing, Bluegrass, Country and Folk, Ryan’s songbook reminiscences heavily on the early hillbilly and folk pioneers. On stage Ryan has toured as a solo performer opening for Country purists like Dwight Yoakam, Rosanne Cash, & Travis Tritt. His acoustic live show combines thumb-picking guitar styles, original folk ballads and vintage Country music from the 1940’s and 1950’s.

Off-stage Ryan travels extensively and in 2010 began snowbirding to southern Florida, flying eventually as far as south-east Asia where he found new audiences for his brand of Americana music. In 2017, Ryan will embark on his 4th studio album, exploring the lighter side of highway romance, van culture, and all the high spots of beauty found on the open road.

Jenn: August into September you will be in the studio recording your fourth album. Can you tell us about that?
Ryan: Yes, I’ll be recording my 4th album this August at New Scotland Yard studios in Dartmouth, NS. It’s been 4 years since my last full length studio release, while that’s not unusual, it has been for me the longest time not having a new record so Im pretty excited to be doing this. As always there will be some new direction in this album, musically.

Jenn: When can we expect your album to be released?
Ryan: The new album will be available for sale in November 2017, with touring dates to accompany it.

Jenn: How did you get started in the music industry?
Ryan: I started perforing in garage bands as a teenager at age 14 and played in punk and metal bands into my early 20’s. The first instrument I learned was electric bass, then acoustic guitar, and then pedal steel guitar. I started writing Country and Folk songs when I was 25 years old. For almost 20 years I played the same guitar, a parlour size Takamine acoustic guitar made in Japan in 1981. My Grandmother gave it to me when I was 15 years old.

Jenn: You were a student Music-therapist at Yarmouth Regional Hospital, can you tell us about that experience?
Ryan: Working at Yarmouth Regional Hospital in the Summer of 2001 changed my life because I was reintroduced to classic country western music by the patients living in seniors care. The music struck me differently then when I first heard it growing up around my parents and grandparents house. I was drawn to the nostalgia of it primarily, and the storytelling. A few years later I began writing country songs while I was still performing in Punk and Heavy Metal bands in Halifax, Nova Scotia.

Jenn: Offstage in 2010 you started “snowbirding”, Can you tell us about your experience doing that?
Ryan: A few things happened collectively around the same time that led me to start “snowbirding” in the Winter months. First, I had an affinity for small motorhomes and camper vans, and graduated from minivans to my own mini-motorhomes eventually. It seemed like the logical set-up as I was touring and travelling so heavily between 2012-2015. It was more practical to just “live on the road” so to speak. In 2013 I released my 3rd studio album in February and had to cancel some of those concerts due to weather. I made up my mind then that I would refrain from performing in the Winter months going forward as the markets in Canada are small enough I could just perform the rest of the year and use the winter months to write, book concerts, and simultaneously be somewhere warm, with my dog! I ended up flying to South East Asia one winter and had the opportunity to perform in Thailand and South Korea for the first time. A lot of these experiences have influenced the writing on my upcoming album.

Jenn: Are you planning to tour after the release of your fourth album?
Ryan: There are upcoming dates in late 2017 yet to be announced on my website which will accompany the release of my newest record. I will also continue to tour the record unofficially throughout the entire calendar of 2018.

Check out my website www.ryancook.ca and stay connected with all the upcoming news that’s coming in 2017 & 2018!