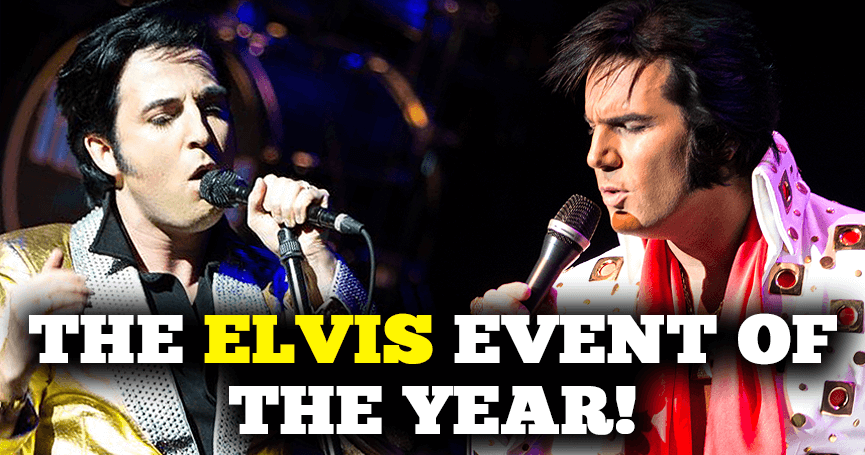 For the first time on the east coast!

Direct from the United Kingdom, Chris Connor, from the “World Famous Elvis Show,” within a few short years, has skyrocketed himself to becoming one of the most popular and sought after Elvis Tribute Artist in the world. Chris was recently named as one of the world’s best tribute acts from the “Telegraph UK” newspaper. His natural looks and voice astounds his audiences at every concert. Chris delivers a powerful Tribute to Elvis in the Concert Years which will leave you mesmerized from beginning to end.

Canada’s Premier Elvis Tribute Artist, Pete Paquette, who has performed across Canada with his hit show “Elvis: The Moments”, will set the stage with his explosive energy, recreating a performance of two of the Kings’ most defining moments of his career, from his early Rock & Roll years to his explosive 1968 Comeback Special wearing the famous black leather outfit.

I had the chance to talk with Pete about how he got started and his upcoming shows!

Pete: I am French Canadian, currently living in Milton, Ontario with my wife Christina. I graduated from University with a degree in Music and French. I own an Entertainment Company, ‘Paquette Productions Ltd’, where we specialize in producing Tribute shows such as A Tribute to Elvis In Concert.

Jenn: How did you become World-class Elvis Tribute Artist?

Pete: It all started when I first entered as a participant in the 2002 Collingwood Elvis Festival. Since then, I have competed in various Elvis Festivals across Ontario, Quebec, and the United States. Throughout the years of competing and after winning many first place titles, I became more recognized in the festival world. In 2007 I was asked to be one of six performers to perform at Elvis Week’s 30th Anniversary Show at the Peabody Hotel in Memphis, Tennessee. A memory I will cherish forever. Currently, I no longer compete in festivals as I now concentrate on producing Tribute shows.

Jenn: What inspired you to become an Elvis Tribute Artist?

Pete: I first discovered Elvis at a young age when I saw an advertisement on television featuring the 1968 Comeback Special and his performance in Hawaii in 1973. From that moment on, I was hooked. I was mesmerized by his appearance and musical talent. Elvis became my idol, someone I could look up to as a young boy. I feel the word ‘Tribute’ is important in describing what I do because I am recreating in an artistic way my interpretation of what Elvis was like as a performer on stage, while using my own abilities as a performer to deliver that performance.

Jenn: Tell us how it felt to headline some of the largest Elvis festivals across North America?

Pete: It is a tremendous honour to be asked to headline an Elvis Festival. When I am on stage performing it gives me great pleasure to see smiles throughout the audience and to hopefully create memories for everyone.
I am extremely fortunate to be in a position where I can showcase my talent as a performer while paying tribute to the man himself, Elvis Presley.

Jenn: Will this be your first time working with Chris Connor?

Pete: No, I have had the privilege of working with Chris Connor since 2015. This will be Chris’ very first tour in the Maritimes. Chris Connor is an exceptional performer, his Tribute to Elvis is very authentic and true to the man. Both Chris and I are really looking forward to bringing this show to the Maritimes. Elvis fans will not be disappointed.

Pete: After this tour, we will be going to British Columbia with this show and then I will be concentrating on our upcoming Christmas shows coming this year in December. As well, I will be focusing on producing and bringing new shows for 2018.

Jenn: I have to ask.. Where do you get all your outfits? Custom made?

Pete: The majority of my costumes are from a company in the States called B&K Enterprises Costume Company. They specialize in Elvis costumes.

Pete: Don’t miss A Tribute to Elvis in Concert with myself, Pete Paquette and from the UK Chris Connor, for his very first appearance in the Maritimes. The show will feature my band The Rockin’ Royals Band with an amazing horn section, accompanied by the sensational Tonettes. This is an Elvis concert experience fun for the whole family. We are all looking forward to bringing our show to the east cost, one that they will surely enjoy.