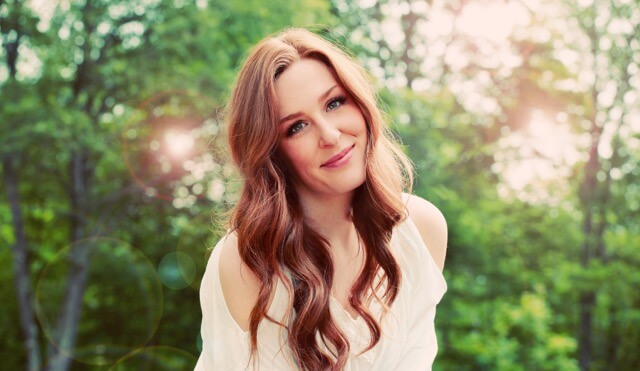 Sarah had the chance to sit down with Amanda Sadler to discuss her latest single, “Drop the Needle.” The two also discussed her love for writing songs, incredible artist collaborations, as well as her plans for the future. Here’s what she had to say.

SM: Congrats on the new single dropping next week. Did you write this sing yourself?
AS: No, actually it was a co-write between myself and Patricia Conroy and Dave Thomson. They’re fantastic and they’ve been two of the top names on my list to write with for some time now, so this has been such a wonderful experience.

SM: Do you prefer collaborating, or do you find that your creative juices flow better when you write on your own?
AS: You know what? I love both for different reasons. There are some songs that I’ve written on my own. In fact, the first EP that I released was completely self-written. So it’s a great opportunity to really develop your sound because it’s just you working on the project. So it’s a great way to stick to your own vision of what you want to sound like. On the other hand, I believe that you’re only as good as the people you surround yourself with and so collaboration and co-writes are another way to grow and learn as a songwriter. Especially getting to work with Patricia and Dave. I consider myself a sponge around them!

SM: I read that you got to work with John D. Willis in Nashville, what was that like?
AS: He’s great, and such a sweetheart! He’s actually the first person I worked with down in Nashville. A good friend of mine, Rob Carnegy set me up to work with him, as John produced some of his work previously. So that was the first time I had ever gone down to Nashville on a plane by myself to this new city. I decided to record three song with John, which eventually turned into a six sing EP because he was so wonderful. He’s such an amazing person for all the work he’s done, and all of the amazing people he’s worked with. You couldn’t meet a more kind and humble person. It was really great to work on that project with him as a developing artist. He’s such an amazing person to learn from and work with.

SM: I know that you’re classically trained in various instruments, so with that in mind, was Country always a genre you wanted to work in?
AS: It’s funny, I get asked a lot about the classical training and I am so grateful for it, especially as a singwriter it really gave me the tools I needed to understand the technique behind songwriting, and performing and all of those aspects. My family always listened to country music, from Shania Twain to Johnny Cash. I was very much raised on it, so it was in my roots from the very beginning. When I started songwriting around the age of 12 or 13, it kind of just came out country. People always ask why I chose country, and it was more like country chose me in a way. I remember the first time I heard the song, “Whiskey Lullaby” by Brad Paisley and Alison Krauss. I was just hooked on this idea of writing in this genre where a single song could make you feel so much. So it kind of a moment of no looking back at that point.

SM: Who were some people who influenced you musically, be it growing up or even now in your career?
AS: Honestly, I’ve been the type of person to listen to so many different styles of music. In terms of Canadian music, Brett Kissel is definitely someone I’ve looked up to for some time. He knows how to rocka crowd, but he’s someone who is so incredibily humble in everything he does. Another artist is Lindi Ortega. What she is doing right now is so unique and so different with her music, and something I want to aspre to. She’s really paving her own way, which can be hard at times, but can be so rewarding when it works.

SM: What are your plans for summer tours and working the festival circuit?
AS: I’m working to promote the new single and new music video being made in the near future with the hopes of getting onto a few things on the go, but nothing is confirmed yet.