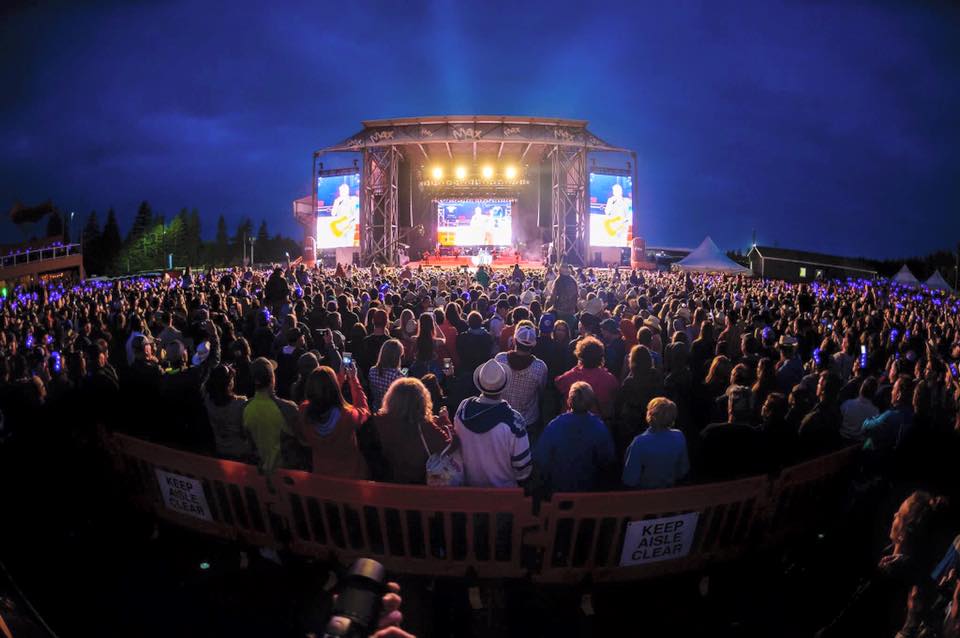 Yesterday capped yet another incredible year at the Lotto Max Presents the Cavendish Beach Music Festival!
Over 100,000 fans walked through the gates of the Cavendish Beach Events Center from July 8th-July 10th to take part in the weekend festivities, and the weather didn’t seem to matter to anyone. They were all there for the same reason – incredible atmosphere, and incredible live country music from some of the best in the business!

The Lotto Max Main Stage was jam-packed full of incredible talent. Mainstage highlights included the incredible trio that is Aaron Grain, Chris Duncombe and David Roberts of The Washboard Union out of Vancouver, BC. They brought with them a blend of outlaw country mixed with a little rock and bluegrass that had the crowd swaying, clapping and wanting more by the end of their set! Another highlight of the day was the highly anticipated group Cold Creek County’s first visit to the festival main stage. Their presence on the stage was incredible and fans were immediately drawn to the stage. Other main stage highlights included the return of the largely successful groups Blackjack Billy, and The Road Hammers to the mainstage. Both of these groups ROCKED the mainstage to help pave the way to the main headliner of Friday night – The Band Perry. The trio came out with total confidence, making good use of the massive stage and posing and interacting with the crowd constantly. While billed as a trio, it’s Kimberly Perry that really engaged the crowd, with brothers Neil and Reid on either side providing a solid foundation of everything else that fills out the show. While Kimberly’s voice is strong, it’s really when the brothers come in with harmonies that they reach their peak together as a group, which made for a very successful first night on the Main stage.

Other Friday highlights included acts from the other musical stages located on the festival grounds. These artists included artist Julia Dunn who, just last year, won the contest through Moncton’s Country Radio station, XL 96.9 to get the chance to sing on stage with last year’s Saturday night headliner, Keith Urban. Friday she was featured on the RBC Emerging Artist stage. She is presently in the studio working with producer, and member of the PEI-based band Haywire working on her first full-length album to be released later this year. Also featured on the Emerging Artist Stage was Jessica Mitchell who is coming off an incredible year. She was also featured as an artist in The Songwriter’s Circle hosted by Cape Breton native, and internationally renowned singer/song-writer Gordie Sampson. Highlights of the Cavendish Farms Kitchen Stage included River Town Saints that featured their hugely successful single, “Cherry Bomb,” Nova Scotia- based Honky Tonk group, Witchitaw and the highly anticipated Restless Heart out of Nashville all played to a packed house of happy festival goers.

Saturday Main Stage highlights included the incredible sounds of Petric. Their harmonies and incredible stage presence made for an awesome set to start off the day. Following Petric was a fellow newcomer to the mainstage, JoJo Mason who right from the beginning of his set was filled with excitement and pure jubilation that is resonated with the audience and they ate it up! Country music and Bluegrass legend, Ricky Skaggs was next on the main stage for a second time in 5 years. This time he brought with him his band, The Kentucky Thunder and gave listeners a taste of the music of the mountains of Kentucky with his set of pure bluegrass. Festival goers were clapping, and dancing their entire set. Next on the main stage was the highly anticipated artist, Tebey. His last visit to the Lotto Max main stage included the shooting of his music video for his hit single, “Now I Do, ” which he reprised, along with his latest single, “Lightweight.” Emerson Drive were up next to last on the main stage and the crowd loved it. With hits like “Tilt-a-whirl”, “Moments”, and “I Should Be Sleeping, ” the crowd loved the seasoned veterans of the festival and got them warmed up for what was yet to come. After two years, a hurricane and countless fan demand, Blake Shelton had finally made his way to the Lotto Max Main Stage. He played before a packed festival on Saturday night opening the how with “Neon Light,” the crowd quite literally exploded unlike anything I had ever heard before. With hit, after hit, after hit, Shelton quite literally rocked those grounds like the hurricane that originally prevented him from making the show two years prior. He even acknowledged by uttering the words, “Screw Arthur!!” Shelton left an imprint on the festival that will not soon be forgotten, nor easy to top!

Jason Price was a notable act that graced the RBC Emerging Artist stage on Saturday. What was comical is that many fans actually thought Price was Dean Brody wanting their picture taken with him. He was also a strong presence throughout the weekend working for Bell TV’s special for the Festival as he, like myself, got to catch up with some of the incredible artists over the weekend. Another incredible act that rocked the grounds Saturday night was the Rik Reese Band. Rik Reese has been a part of the Cavendish Beach Music Festival for the past 7 years now, and has become a true staple to the festival. Some even calling him the “Unofficial Mayor of Cavendish Beach Music Festival!” He, and “Gypsy” Ron Parent, along with Steve Poitras played to a packed solid house at the Cavendish Farms Kitchen Stage where Fans were actually invited to join the group on stage during their set! I think it’s safe to say that Saturday night was most definitely the night to party – and party HARD!
Sunday brought with it rain, and lots of it. However, that did not stop the festival goers in any way from wanting to hear some great live music! They day started off on the Main stage with probably one of the most anticipated acts of the weekend, Meghan Patrick! She, and her band brought with them the traditional sounds of roots county that hardcore country fans loved and longed to hear with her hits like, “Bow Chicka Bow Wow.” Up next on the main stage was Newfoundland born artist, Jason Benoit coming off an incredible year with his hits “Cold Day Comin'”, and “Gone Long Gone.” His catchy lyrics and sound had fans singing loud! Bobby Wills hit the stage next with his hits such as “Show Some Respect.” He was a delight to chat with earlier in the week before his set on the main stage! Old Dominion graced the main stage next much to the excitement with the crowd, opening their set with their hit “Snapback!” From there they held the crowd in the palm of their hand with hits like “Break Up with Him!” Fan Favorite, and return veteran Dean Brody hit the stage next to warm up the crowd for Kenny Chesney’s headlining act. With songs like “Dirt,” “Little Yellow Blanket,” “Bounty” and his latest single, “Monterrey” the entire crowd, myself included, were singing at the top of their lungs! The main and final act of the Main Stage hit next! Kenny Chesney was a kindred spirit, so to speak with fans in the PEI crowd, given his love for this island! He is a 2-year veteran headliner of the festival and fans were delighted to see his return to the main stage to hear his numerous hits such as “Young” and “Beer in Mexico!” It was the perfect way to close out the main stage and end the festival!

Other notable Sunday acts included Lucas Hoge, and the Divorcees who both had stellar sets at the Cavendish Farms kitchen stage! *Note that Lucas Hoge’s latest single, “Boom Boom” dropped today and is available for download on iTunes! Also another incredible artist was Kaia Kater. She brought with her a very eclectic interpretation of the Bluegrass genre and was a personal favorite of mine over the weekend.
2016 was most definitely another hit out the park! We’re already amped for next year’s performances, and can’t wait to hear who will be heading to the beach next July!

See you all next year at the beach! The Cavendish Beach Music Festival will take place July 7th, 8th and 9th in 2017. Check out their gallery of photos as well from the festival photographers.

Check out the the wrap up videos from each day. Great videos composed by the awesome guys at Confound Films.