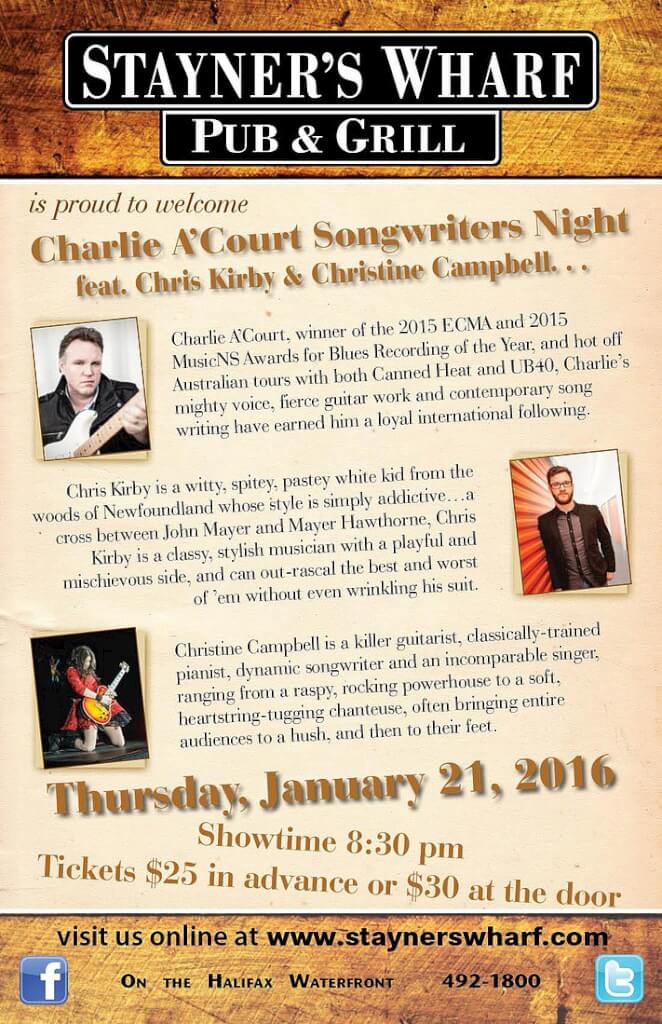 Canadian singer-songwriter-guitarist Charlie A’Court is the proverbial force to be reckoned with. Planted at the crossroads of roots and soul, Charlie’s mighty voice, fierce guitar work, and contemporary songwriting, have earned him a loyal and ever-growing international following and a host of awards and accolades for his five solo recordings to date. His latest release, Come On Over, was recognized with the 2015 East Coast Music Award and 2015 MusicNS Award forBlues Recording of the Year. Along with non-stop touring throughout Canada, Charlie A’Court has graced stages in the USA, the UK, Europe, and over the past several years, tours regularly in Australia, where he’s recently released Come On Over on the Fanfare Records label. Along with his own shows, numerous festival appearances, and showcasing at the inaugural Australia Music Week, Charlie’s latest tour “down under” included opening a string of dates for legendary American blues-boogie band Canned Heat, and touring the OZ nation as opener for the iconic UK-based reggae outfit,UB40. The winner of the 2015 Maritime Blues Challenge, Charlie A’Court will represent Canada’s east coast at the upcoming 2016 International Blues Challenge in Memphis, Tennessee! Fearlessly bridging genres and challenging stylistic conventions, Charlie A’Court has secured his place as one of Canada’s fresh generation of artists taking the international stage by storm. www.charlieacourt.com

Chris Kirby is an award winning songwriter, artist and producer with 5 full-length solo albums, and more than 100 original songs to his credit including co-writes with the likes of Eddie Schwartz, Colin MacDonald (The Trews), Stephen Fearing, Shaun Verreault (Wide Mouth Mason), Charlie A’Court, and Tim Chaisson. His primary artistic focus is classic R&B/Soul music, but Chris can also be found songwriting/producing across many genres including Pop-Rock and Country. He’s a witty, spitey, pastey white kid from the woods of Newfoundland whose style is simply addictive. A cross between John Mayer and Mayer Hawthorne, Chris Kirby is a classy and stylish musician with a playful and mischievous side, and can out-rascal the best – and worst – of ’em… without even wrinkling his suit. Chris Kirby is a nine-time ECMA nominee and has four MusicNL wins. Career highlights include performing at the 2010 Vancouver Winter Olympics, participation in the 2010 CBC Song Quest program, and multiple festival and showcase performances.www.chriskirbyonline.com

A killer guitarist, a classically-trained pianist, a sincere, dynamic songwriter and an incomparable singer, Christine Campbell is truly a rare, multi-faceted talent. Ranging from a raspy, rocking powerhouse to a soft, heartstring-tugging chanteuse, she brings entire audiences to a hush, and then to their feet. With a voice that combines the best elements of Anne Wilson, Bonnie Raitt and Janis Joplin, Christine Campbell is a mesmerizing musical force. She has blown away festival crowds at Stanfest, Dutch Mason Blues Fest, Lunenburg Folk Fest, Halifax Urban Folk Fest, PEI Jazz and Blues Fest, and Harmony Bazaar. Christine Campbell received standing ovations as opener for Chantal Kreviazuk, Lou Gramm(formerly of Foreigner), has opened for The Kentucky Headhunters, Bif Naked and her ever-expanding, loyal fan base helped to cement Christine Campbell as the special guest of Bob Seger in Halifax and Saint John in November 2014. The PEI-born, Halifax-based Christine Campbell is currently writing material in preparation for a new album in 2016, while continuing a non-stop touring schedule. www.christinecampbellmusic.ca