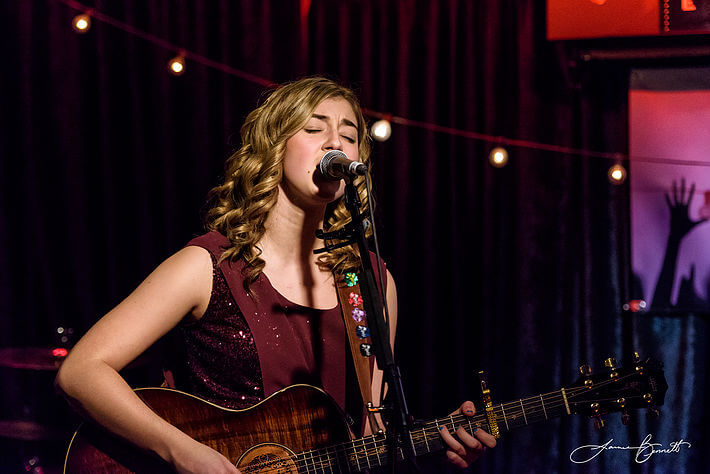 Last night it was Country Music night at The Carleton Bar and Grill and I hope to see many more country music nights there.  Opening the night was the super talented young lady Makayla Lynn.  Now, I have seen Makayla Lynn perform many times and there is no doubt I am a fan.  But at 14 years of age and already having many accomplishments under her belt than most musicians twice her age it was great to watch her shine.  The Carleton is a spectacular venue with a great ambience and even better sound.   The place was packed on this night to watch these two stellar acts.  I have to admit it was my first time at this venue as well and I cannot believe I have been missing out on such a great venue here in Downtown Halifax.  I have to give kudos to Mike Campbell.

Makayla Lynn’s performance was top notch. In fact, I am always impressed with her performances but even more so on this night. She looked great, sounded suburb and this venue seemed at home for her.  The audience was attentive to each and every one of her songs.  She is backed as usual by talented musician, producer Chris Iannetti.  Listening to her sing last night it was easy to see that she loves what she is doing and in always progressing with her sound and stage presence.  I sure hope that she gets the opportunity to perform at the Carleton for years to come.

Following up behind Makayla was country singer/songwriter Jason Price.  This was my first time taking in the live performance of Price. I have to say this guy oozes Country Music.  From his cowboy hat, scruffy beard and blue jeans right down to his voice.  I was memorized all night by his sound. It was refreshing to hear old time country not only his voice but also his song choices.  That includes his originals and his covers.  I could not stop listening to his sound. I do not normally try to compare singers to other artists but his voice had this familiar yet unique sound.  I tried closing my eyes to listen to him sing and I could hear a mix of Randy Travis and Blake Shelton.  Shortly, after this Jason performed a Blake Shelton song and confirmed my initial thoughts on his sound but I kept hearing Randy Travis as well.  What topped the night off for me was his performance of Chris Stapleton’s Tennessee Whiskey.  This guy is the real deal, true traditional country, and I know I will be taking in more of his shows.