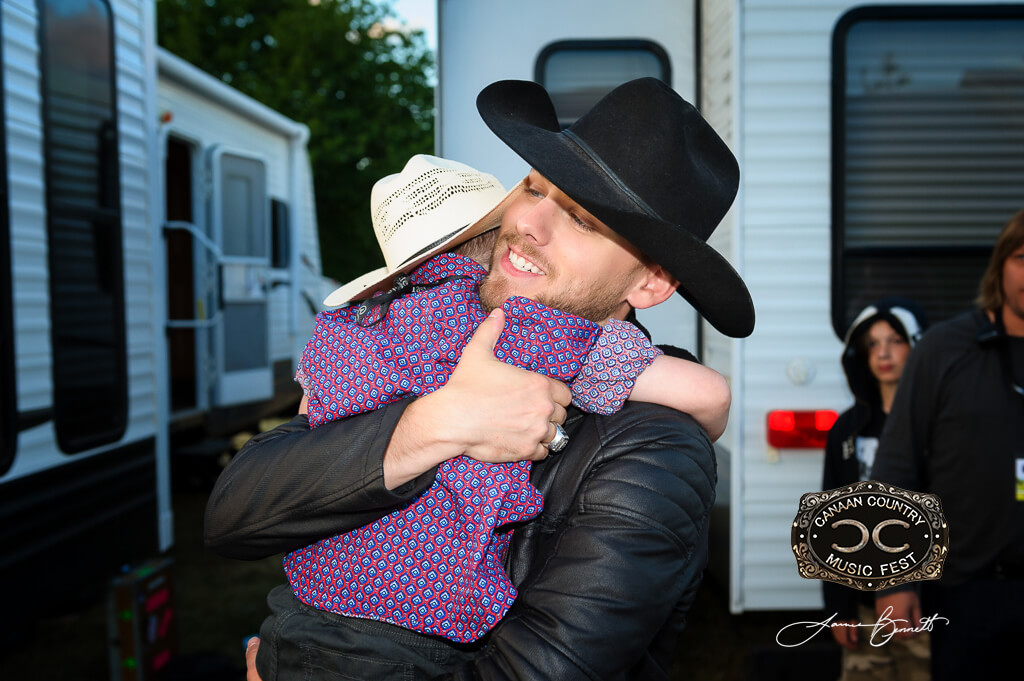 I was asked by father of Cash, John Strowbridge, to post this article he wrote as he wanted to find the best way to thank all the supporters of Cash and his family. I was immediately touched and honoured that he asked me. So here is the article he sent me.

So, as some of you may know, my son Cash had been counting down the days to Canaan country music fest. When we found out that Brett Kissel and Jess Moskaluke were coming, Cash was over the moon excited to see who he refers to as his best buddy and girlfriend, respectively. Never in a million years did we expect that a photo a day would turn into what it did.

It was a bit of a rush getting out of the house yesterday morning, as things never go as smoothly as you think they will in the early hours. As soon as we hit the highway and met up with our friends Mike and Laura, rain drops started falling on the windshield. We figured we were in for a wet day, but boy were we wrong. The weather held out for a perfect day, and we all have the sunburn to prove it.

When we arrived at the festival grounds, we parked and just hung out for a bit while we awaited the gates to open. Once we got in we met some friends from Hot Country 103.5, who were kind enough to have made up a special Hot Country name tag that read “Cowboy Cash”. He has seen and heard those faces and names so many times and he was really excited to have a cool name tag.

It really was kind of shocking to see the number of people who recognized our little man. Every day when you post the photo you get some retweets and likes but it was eye opening to see the true impact that social media can have on something like this.

The East Coast showcase was amazing. Some of the artists were new to me but I can honestly say it won’t be the last time I try to take in their shows. There is some amazing talent in the maritimes and Saturdays showcase only served to prove this true. The extra little tidbit was, many of these artists had also followed Cash’s journey and were excited for a photo with him as well as watching him see Brett for the first time.

I’m also partial to Jason Benoit. As fellow Newfoundlander, we always enjoy seeing one of our own succeed. I’ve heard about Jason for years and heard him a bit at Cavendish last year and I knew that big things were in store for this guy. He put off a great show that we all really enjoyed. Wes Mack is also another artist that can also be heard coming from the playlist in my truck. His shows are very high energy and was a perfect choice to perform at the 1st CCMF.

Now what Cash didn’t know was that we had been approached by both Brett and his assistant Becky, as well as one of the organizers of the event, Jessica. Everyone wanted to make sure that Brett and Cash had some time to hangout. We (our entire family) were told to meet at the security gate just after 8 and we would be taken to meet Brett. As we were waiting we were chatting with Jessica and see told us she had something that she wanted to give to cash. She knelt down and showed him that they had some CCMF belt buckles made for the headliners at the concert, but they also had one made for Cash as well. That was very unexpected and really thoughtful of her and the team. It was one of a few misty eyes moments that were to come over the new few minutes.

As we waited for Brett to finish an interview in his trailer, And mingled with some meet and greet contest winners, Cruise from 103.5 sees Cash and immediately comes over and tells us to come with him. When we pass around the trailer, who is standing their but Cash’s self proclaimed girlfriend, Jess Moskaluke. Once she sees him calls out to him and he rushes over for a big hug. He was super excited. She chatted with him for a bit before it was her time to hit the stage. This speaks to the quality of person that Jess is, a true professional with a very personal side. I was happy Cash got to see her as well.

Then it was our turn. Our family, along with 2 other meet and greet winners, were taken to just outside Brett’s trailer. By this time, quite a little crowd had gathered to see what would happen at this reunion, especially after we had just told Cash he was going to meet Brett. When he first came around the corner Cash looked back at me and his mother as if to say “are you guys seeing this”. It was awesome. He stopped to chat and signed for the other two fans before getting to Cash and Logan. Once he turned and saw the boys the biggest smile came over his face. He made a point of chatting with Logan before wrapping Cash in the largest hug. He then took time to chat with both the boys. I made a point of telling him that I really hope that one day someone does something for his daughter Mila, that means as much to her as that moment meant to our family. Words can’t describe what this whole experience meant to me as a father. It was really something special.

Then, we were lucky enough to head back out and catch the majority of Jess’ set before Brett hit the stage. We were so happy we didn’t miss out on this because as you may have heard, Cash thinks Jess is pretty good too.

Then it was time for Brett to hit the stage. This was the first chance that Cash ever had to catch Brett live on stage. When the music started the look on Cash’s face was priceless. He was in his glee. A few songs in I saw Brett’s assistant Becky, go tap on my wife Jessica’s shoulder and motion to her to follow her. Jess told me that Brett wanted to bring Cash onstage. I was floored but also a little nervous for my little man as I didn’t know how he would react on stage in front of all those people after such a long day.

We didn’t really know what to expect when Brett started telling Cash’s story of his countdown. The roar of the crowd when he brought him out on stage was pretty cool. He then asked Cash where he was from and if he liked country music. I could tell he was pretty nervous but he was keeping it together pretty well. Then came the question that I knew could produce a multitude of answers. “Who would be one of your favourite country singers of all time.?” I knew we had a 50/50 shot here but for some reason he decided to stick by his girl and blurted out “uhhhhhh……Jess Moskaluke”. The whole place erupts in laughter. Even Brett had a huge smile and told Cash that he picked the right answer. Obviously Cash loves Brett very much but I honestly think he felt like he just had his buddy asking him a question about his favourite singer. That’s the thing I was thinking about later. I think Cash sees Brett as a buddy who sings, rather than a singer who is his buddy. Either way it gave everyone in the crowd a great chuckle.

Then came a real cool moment. Brett had his tour manager Kevin, bring out a brand new guitar and he presented it to Cash on stage as a token of his appreciation for keeping him entertained all these months on social media. He then took up the guitar and signed “To Cash, Brett”. I was blown away, as I am sure was the rest of my family. I think my wife already has a spot picked out for that guitar in Cash’s room in a new home. It is something that I’m sure he will treasure for the rest of his life.

After that moment Brett continued with his set, and when he finished, the crowd erupted in a huge applause. Thus ended the first ever Canaan Country Music Fest. It was a pretty quiet ride home, but when I looked back Cash was curled up next to his new guitar and I just couldn’t believe what an amazing day we had all just experienced.

A few more personal things I wanted to put out there:

Early last September, I decided to cancel my XM radio subscription. I was upset that I wasn’t hearing many of the Great Canadian country music artists that I loved. This was also around the same time that Energy 103.5 had become Hot Country 103.5, so naturally I hooked into this new radio station that had plenty of opportunity to hear some great Canadian content. When this group sponsored Canaan Country Music Fest, we started to tag them in the photos and they always made sure to tweet it themselves and mention Cash’s countdown many times on the air. I really want to thank the whole group as they have been wonderful friends to Cash during this whole thing.

James Bennett at JB Photos has been really good to us since we first crossed paths at Cavendish last year. He took a photo of Cash that they used on their social media and it kind of blew up a bit. People started recognizing us at the festival and even back here in town. James was at the festival yesterday and he helped capture some of the most exciting moments in this whole thing. Thanks again!

Jessica and the team at Canaan Country Music fest should be very proud of what they have started. It’s takes a lot of time, hard work and money to put off something like that and I hope that this was the first of many good times at CCMF. We need to get out and support these things or we risk losing them, and that would be a horrible shame.

It’s really something when your kids have famous people that they love/look up to and they actually get to meet them. You sometimes here of people that are let down when they meet a hero of theirs. I’m glad my kids have decided to look up to two great people like Jess Moskaluke and Brett Kissel. They were both legitimately excited to see Cash, and you couldn’t have met more down to earth people. What an amazing experience.

So I guess we would like to thank the whole team at Hot Country 103.5, JB Photos, the whole team at Canaan country music fest, Jess Moskaluke, and of course Brett Kissel (and his assistant Becky) who helped make this day one of the most memorable days that Cash may ever have.

Onto Cavendish next weekend and our next adventure with Cowboy Cash!

Thanks everyone for everything.