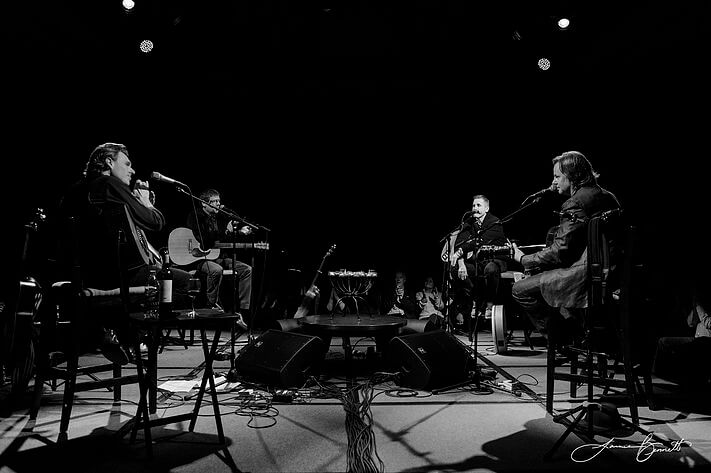 Four of the East Coast’s most talented singer songwriters came together at the Casino, NS in Halifax to pay tribute to the late Ron Hynes.  What was originally slated as a fundraiser for Ron Hynes to help out with his medical issues became a memorial as his conditions change rapidly.

The host of the night, Cape Bretoner Bruce Guthro, was joined with PEI native and Order of Canada Lennie Gallant.  Also paying tribute and respect was fellow NFLD native and former Great Big Sea member Sean McCann.  And last but not least Dartmouth native, Joel Plaskett who is also an an award winning music producer.

This was the 5th night in a row for the song writers circle. The first three events were corporate events and not open to the public.  Friday and Saturday night were open to the public and both nights were a sell out.  The audience were definitely in for a treat this holiday season.  This group of musicians are not only talented singer songwriters but quite funny as well.  We heard many stories from each. Some stories they shared with each other over the years as well as stories of Ron Hynes.  Both Lennie Gallant and Bruce Guthro performed songs that they wrote shortly after the death of Ron Hynes that were emotionally moving.

I have to say Guthro and McCann connected on a level all night that had myself and the audience in stitches.  They have been friends for a long time and their stories of their trials and tribulations could fill a book.  This has been the 10th year that Bruce has been hosting a song writers circle at the Casino, NS. Their next one will be hosted in March 2016 with the announcements of singer songwriters still to come. I know for sure that I will not be missing it.