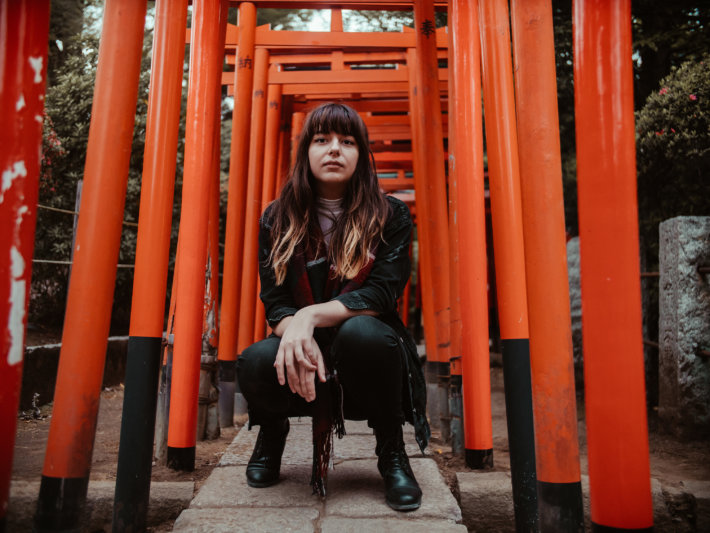 February 22, 2019  Pop/Electronic star on the rise, Edmonton’s Talltale, is set to release the most compelling, immersive and conceptually deep project of her burgeoning career. A Japanese Fever Dream, set for release on March 29,  is a hypnotic, insistently lush, lyrically contemplative collection of original music which has been powerfully influenced by the songwriter/ vocalist/drummer’s fascination with Japan, its culture and people.

The lead-off single is the tantalizing and explosively upbeat song “Tokyo”, co-written and produced by Alex Klingle, which talks about the excitement and sense of overwhelming other-ness that Talltale – and arguably many other visitors – felt upon arriving in the massive capital city of Japan. The video was released today and can be seen here: https://www.youtube.com/watch?v=RdEurty7RfU&feature=youtu.be

“This record is very different for me as a writer because it’s very self-reflective; it’s not so much about other people, which gives it a dreamier vibe than previous songs. Tokyo talks about my first reaction to Japan and how distinctive their culture is. I realized quickly that I could not get by on a few Japanese words. I was completely out of my element and couldn’t even guess at reading the signs. I think that profoundly effected me, but in an exciting way because I needed to get back there as soon as I could,” Talltale said.

Talltale has made three trips to Japan, the most recent with a videographer to shoot footage that will accompany the songs on A Japanese Fever Dream. As the co-owner of her video production company, her songwriting process encompasses a vibrant visual component, with the words and music often having a sublimely cinematic component.

“I can’t listen to music without picturing what the video should look like or the visuals. I think visuals are a necessity for helping to promote your music, but for me it’s deeper than that, it’s just inseparable in my opinion. Doing the videos is another way to communicate what I want a song to say and how I wanted it to feel,” she said. “Especially for this album, I want to give people a bit of the feeling of what it’s like to be there. I feel that video is the most visceral way to do that.”