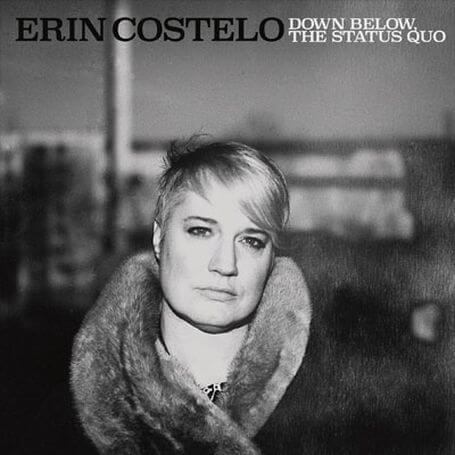 ERIN COSTELO SET TO RELEASE DOWN BELOW, THE STATUS QUO ON MARCH 25

(Halifax, NS) — Erin Costelo’s latest album Down Below, The Status Quo — out March 25 on her own Venue Records/Pheromone Distribution — is a reflection of her (and our) complicated world, expressed through a voice unlike any other in Canada. Having paid more overt tribute to her vintage soul music influences on her previous album, We Can Get Over,Erin’s musical evolution has taken its next natural step on Down Below, The Status Quo by channeling those themes into 10 new deeply personal tracks that display her exceptional gifts as a producer, songwriter and arranger.

Costelo, a Halifax, Nova Scotia native, painstakingly made the album at Joel Plaskett’s New Scotland Yard studio in Dartmouth, working closely with engineer Thomas Stajcer and a top-notch band comprised of her longtime guitarist Clive MacNutt, bassist Ian Bennett, drummers Dave Marsh and Matt Gallant, along with the Blue Engine String Quartet and horns supplied by Matt Myer, Andrew Jackson and Andrew MacKelvie. Key tracks include the unflinching “Fighter,” “Low” and “Titanic” (the last co-written with Stephen Fearing), along with the hopeful “Move” and “Turn It On.”

Down Below, The Status Quo follows on the heels of We Can Get Over being named R&B/Soul Recording of the Year at the 2014 East Coast Music Awards. In the wake of that triumph, she shared stages with Mavis Staples, Dr. John, and Bettye LaVette, as well as appearing on Joel Plaskett’s latest release, The Park Avenue Sobriety Test, and joining him for his performance with the National Arts Centre Orchestra.

Down Below, The Status Quo captures that glorious moment when an artist discovers their true soul. Hearing what Erin Costelo has accomplished with this album may help us discover our own as well.

Pre-Order Down Below, The Status Quo now from Maplemusic.com