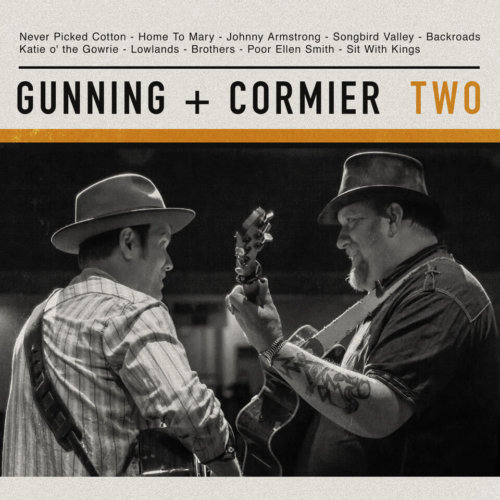 Dave Gunning and J.P Cormier have joined together to make an album together called “Two”. The album is set to release this Friday June 30th, the same day they take the main stage at Stan Rogers Folk Festival. I had a chance to ask them about their new album and upcoming plans.

Jenn: Tell us about your new album together titled Two that will be released June 30th.
Dave & J.P: It is a collaboration over 20 years in the making. We’ve been playing together all those years and writing together so it made perfect sense to finally do a formal project together. We limited our options to just two vocals and two guitars which inspired our arrangements, writing and song choices.

Jenn: What was it like working together recording this album?
Dave & J.P: It was a new process for us both because we were intentionally creating a new sound based on only four tracks. But it also felt very comfortable because we’ve worked together so much in the past and have had a long standing friendship that feels more like family.

Jenn: Did you both write or co-write any of the songs on the album?
Dave & J.P: Yes. We’ve written together pretty well constantly for the last two decades. So for this record we wrote some new material and picked other traditional songs and covers to arrange and make our own.

Jenn: You are performing at Stanfest June 30th. Tell us how it feels to be part of such a big festival here in Nova Scotia.
Dave & J.P: It’s always fun. We’ve both been playing it since the beginning. It’s very much our home festival and a place where we’ve always felt comfortable trying new material and it’s the perfect place to be releasing this record.

Jenn: What do you both have planned for the summer?
Dave & J.P: Lots of touring as Gunning + Cormier and also many solo shows. We’re happy that most of our dates are around the East Coast this summer with one trip to Ontario. Once the Fall hits we’re off to Alberta and Saskatchewan for some dates.

Jenn: I look forward to meeting you guys at Stanfest. Is there anything else you would like to add?
Dave & J.P: Nope That’s all…. hahahaha