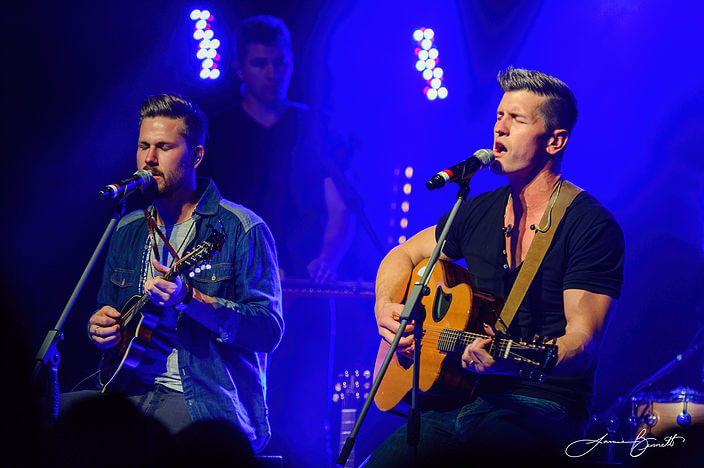 High Valley put on a show at the Casino NS as to why they are the current Canadian Country Music Association Duo of the Year.  Fans were delighted to all of their favorite songs and hits including Make you Mine, She’s with Me, and Come on down.  These Alberta Boys adapted well to the East Coast Kitchen Party style which they call a hoe down in Western Canada.  After all, they had practice tearing it up in Halifax not along ago at the CCMA Music Week and Awards Show.  Not to forget this was a Thursday night show and fans turned out in large numbers.

High Valley treated many of their fans to a private meet and greet before their show and later invited the entire audience to another meet and greet and autograph session.   High Valley has to be the nicest, most genuine guys I have met to date.  The nice boys next door sure do know how to treat their fans.  High Valley had to be at the airport at 4am to fly to London for the C2C festival.  Yet they made time for their fans and were late leaving the casino. Not sure if they even slept before catching their flights.  Did I mention these guys are funny too?  They are plenty of joking around with one another on stage and the audience could be heard laughing throughout the night.

High Valley often takes the time to thank their father for believing in them and putting up the family farm to finance their first album.  Well now fans got to see why their father believed in them.  Their music and sound is refreshing and true to their roots and beliefs.  Now living in Nashville must be a little bit of culture shock for them.  Northern Alberta vs Nashville might be just a tad bit warmer in Nashville.  But I am sure it’s simply a bonus to living their dream of playing country music for their fans.  Photos By James Bennett

Full Gallery of Photos at http://www.jbphotos.ca/High-Valley-Casino-NS/