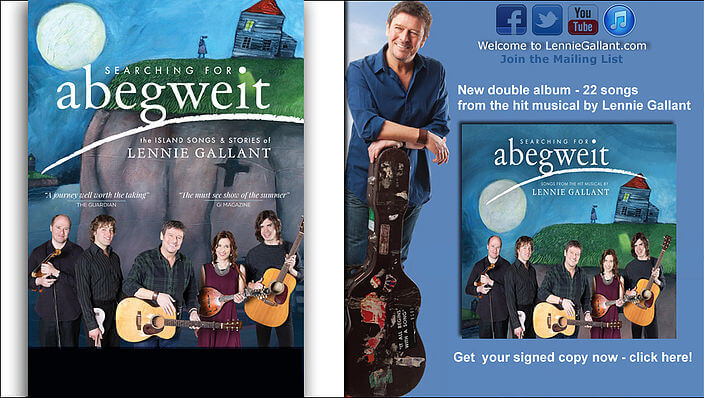 *songs from the hit musical by Lennie Gallant*

Over the past two summers (2014 and 2015) Lennie Gallant and band performed over 85 sold out shows of his runaway theatrical hit “Searching For Abegweit: The Island Songs & Stories of Lennie Gallant”. The show is a musical love letter to Prince Edward Island that stars the artist himself and presents his compositions about PEI alongside comedic stories, poignant tales, and Island legends. The show is presented in a multimedia format that includes a plethora of images from PEI visual artist and sibling, Karen Gallant.

Many of these Prince Edward Island themed songs were gathered from the span of Lennie Gallant’s expansive career, along with a number of new compositions written specifically for the show.  The new album, Searching For Abegweit – songs from the hit musical by Lennie Gallant – contains all 22 of the musical numbers from the live production. Recorded live during last summer’s run of Searching For Abegweit at PEI Brewing Company in Charlottetown, PEI, the recording features Lennie Gallant on lead vocals, guitar, harmonica and bodhran, nephews Jeremy Gallant on keyboards and percussion and Jonathan Gallant on backing vocals, drums, percussion and mandolin. Rounding out the band is Lennie’s long-time violinist Sean Kemp, and Patricia Richard on bodhran, mandolin, banjo, and vocals. Mi’kmaq chanter Hubert Francis and The Lone Cry Drummers also make guest appearances. The album was produced by Lennie Gallant, recorded by Phillip MacLellan, and mixed by Graeme Campbell. The album graphic design is by Ashley Paynter.

The 22 songs here include “Country Store”, “Lord Selkirk’s Land”, “Abegweit”, “A Day With You In Paradise”, “Has Anybody Seen My Skates”, and the anthemic, heart-wrenching theme song, “Searching For Abegweit”.  The album also showcases new arrangements for Lennie classics such as “Island Clay”, “Northern Lights”, “Tales of the Phantom Ship”, “La Tempete”, “Back to Rustico” and “Peter’s Dream”. After many years of hearing his most covered song performed by other artists, you can finally hear the author himself performing on his well-known PEI rum running saga, “The Nellie J Banks”.

The recent recipient of the Canadian Folk Music Award for Artist of the Year and a member of the Order of Canada for his contributions to Canadian culture, Lennie Gallant’s previous body of work includes ten albums (eight in English and two in French), for which he has garnered a host of awards and nominations from the Junos, ECMA and Prix Eloizes.

Searching For Abegweit is available for purchase at select stores, mail order at www.lenniegallant.com and download at iTunes.