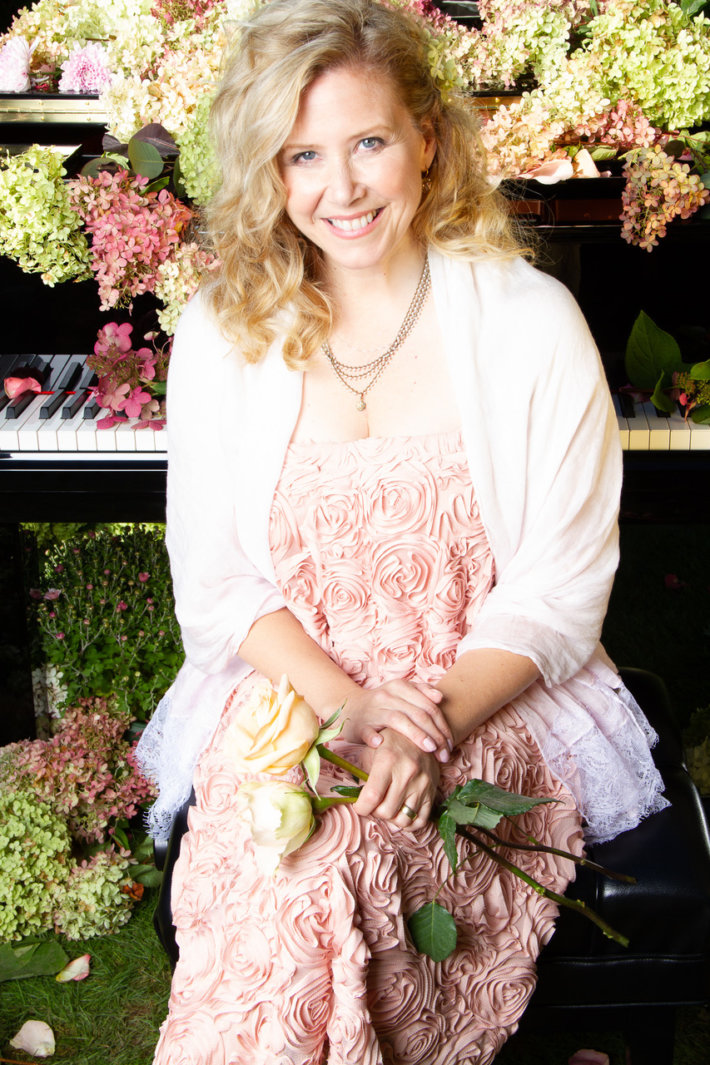 Celebrate the Moms in your life and join Halifax-based singer-songwriter, musician, gardener and author, Linda Brooks as she performs a special Mother’s Day concert to promote the release of her new CD and companion book, ORCHESTRA IN MY GARDEN: Lessons Learned From Digging Deep at St. Matthew’s United Church in Halifax on Saturday, May 11 at 7 p.m.

“This Mother’s Day concert event is a celebration of the women in our lives who shape, inform and encourage our best selves. I’m excited to honour them with you in story and song,” says Brooks.

Brooks will sing and perform on the grand piano and be joined on stage by her band, James Logan on guitar, Jamie Gatti on bass, Dave Burton on drums and cellist, Catherine Little.

With a recording career that spans over 20 years, this latest double album of 22 original songs will mark Linda Brooks’ 5th and most ambitious release. The music, set to be released on May 10 digitally, was exclusively presented as a companion download with her book, ORCHESTRA IN MY GARDEN: Lessons Learned From Digging Deep in 2018 and will now be released world-wide online and in CD form.

I had the opportunity to interview Linda, read our full interview below.

1. First off, tell us a little bit about yourself?

I grew up in a musical family on a third generation potato farm in Northern New Brunswick. I’ve been a musician for several years and have recorded five albums. I’m a mom of two grown boys and a recent empty nester who has been writing and gardening most of my life. I recently became a first-time author.

2. You have a new album set to be released May 10th, tell us about that?

My new Album “Orchestra In My Garden”  is a collection of 22 original songs celebrating the beauty and inspiration of nature and its relationship to our own lives.

It features piano and vocals performed and recorded live in my home where we created a studio with my garden in view, as well as cello, bass, guitar, drums and background vocals added to the mix in various degrees for each tune.

Some are simply piano/vocal moments while other echo the fullness of the garden that inspired them.

3. What was the inspiration behind the album? How did you come up with the album title?

This 22 song album is the companion music for my book, “Orchestra In My Garden: Lessons Learned From Digging”, and the title for both arose from an essay I wrote several years ago, while struggling to find a work/life balance as a young mom and artist.

Over time, as I stepped back from performing, my garden became a place of meditation where I could nurture myself as  both a caregiver and an artist by connecting to the wisdom of nature. It has continued to be my most influential muse, yielding a veritable orchestra of inspiration-hence, the title.

4. Who are some of your musical influences?

My grandmother was my biggest influence, coaching me as a child when I began to play by ear. Even though I later took lessons for a few years, her encouragement to play as I heard it was the first step toward trusting my own instincts and becoming a songwriter. She could easily switch between written music and playing by ear so she taught me the value of both, and I’m so grateful to her for that.

5. How did you get your start in the music industry?

After university at Mount Allison in NB, I attended law school in Halifax, paying my way through by performing in dinner theatre, and following that up by participating at benefit shows to get my own music in front of the public more. It was such a contrast to what I was studying, and after catching myself writing lyrics in more than one class, I realized I was better suited to a musical environment where I could bloom, pardon the pun. I got the law degree but the only practicing happens at my piano.

6. Tell us about your song writing style?

I write on piano so that informs some of my work stylistically I suppose. Often the music and a bit of a lyrical idea come at once as a starting point, but not always. I go with it, however it arrives.

A far as this project goes, I’d have to describe my style as “conduit”. The inspiration I felt each time I came in from the garden was so intense that I quickly realised my job was to show up at my instrument and write whatever was coming until there was no more.

After years of struggling to figure out where my music fits, the best approach I’ve adopted is to simply write, and let the music tell me where it belongs. Oh, and to get the creativity out while its flowing-editing is for another day.

7. If you could collaborate with anyone, who would it be?

I’m a big fan of both Sarah McLachlan and Tori Amos, both of whom are not only great singer/songwriter/pianists, but also inspiring women who share themselves and their art with a great deal of authenticity. They are both at the top of my list, if you’re offering!

Just that I’m grateful for the road this project is taking me on. Because of the “nature” of it ( sorry about that ) I’m performing and speaking to some audiences I never have before. The stories I’m sharing seem to be creating an opening for others to share theirs with me in return. It’s humbling. On a certain level, I’ve always felt we’re all more alike than different, but now I’m reminded of that truth almost daily, and feeling more inspired by it than ever.