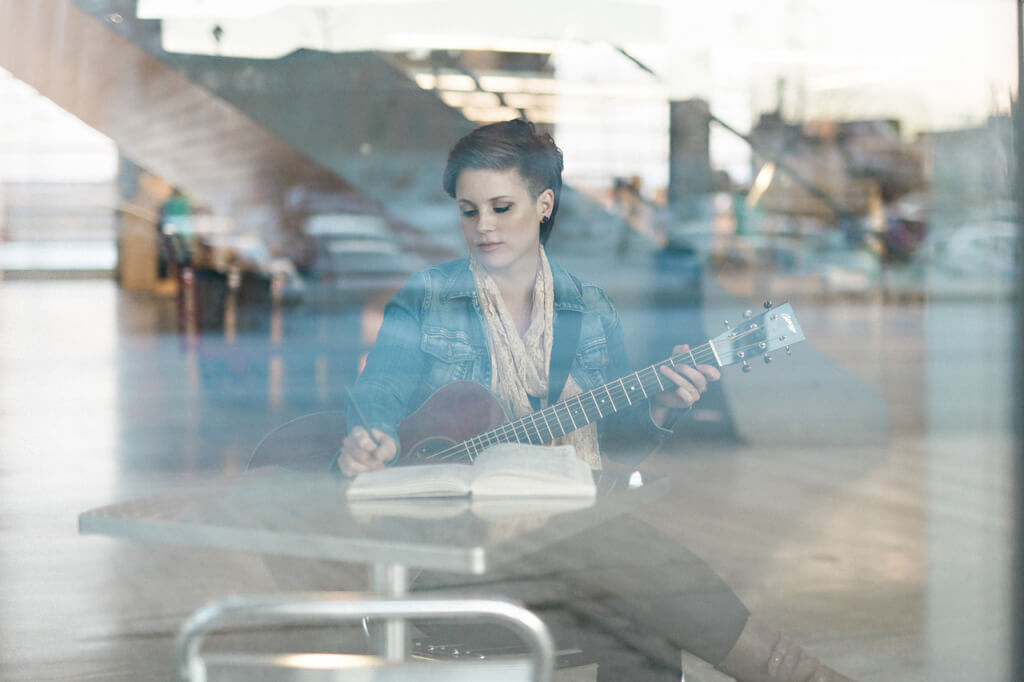 Halifax-based, JUNO-award-winning singer-songwriter, Meaghan Smith’s latest project, Our Song – an opportunity for her music fans to have their stories told in song – just released new song “The One” today, Sept. 1 at oursongmusic.com.

With a new song unveiled the first Friday of every month, Our Song was a concept created earlier this year in collaboration with multi-instrumentalist / music producer, Jason Mingo, who Smith effectively calls her HusBand.

I had the chance to speak with Meaghan about her latest project.

First of all, tell us a little bit about you?

Hey Daily Musician! Thanks for asking… A little about me? Okay. Well, I’ve never had even a sip of coca cola. I love the smell of falling leaves. I love chocolate with nuts in it. I make really good soup. Butternut squash is my current specialty. I grew up in a musical family. Meaning there was always a radio on, or a record playing, or an instrument of some type being played. It was never quiet. I go for a walk in the woods every day, rain or shine. I can’t read music. I just feel it, love it, sing it, play it, and write it.

Can you tell us about your new project “Our Song”.

I want to hear your story and then I want to write you your very own, tailor made song! I am also a painter, and I have really enjoyed doing commissioned art for people. This is the exact same concept, only I’m making you songs instead of paintings. I have written songs for people’s weddings, their anniversaries, their brand new babies, their lost loves… There are no limits. It’s one of the most inspiring things I’ve ever done.

Your new single “The One” was released September 1st. Can you tell me the story behind the lyrics?

The One was a wedding song for a beautiful couple, Shayna and Travis. It was commissioned by Shayna’s sister as a wedding gift, and was the couple’s first dance. They had both been through some previous relationships and difficult times trying to find ‘the one’. That’s something I could really relate to. I had been engaged three times before meeting and lucking out with my HusBand, Jason Mingo. (He’s my husband and my entire band… He plays all the instruments on every Our Song.) He’s amazing and SO worth the wait! It was a story I could relate to and one that I was so happy to write into a song for Shayna and Travis.

Who were some of your music influences?

Everything I hear influences me. Today I’m totally discovering Kacey Musgraves! I had never heard her music before and it’s currently blowing my mind. Like, as I type this answer I am listening to her entire library (I just downloaded every song I could find on iTunes) and am learning so much! I want to work on writing better lyrics, keeping them honest and concise, but not cluttered. I also want to focus on not relying on cliches, but keep things relatable.

Can you tell us about your writing style?

I listen to music to get in the right mood. Nothing affects me the way good music does. It doesn’t matter what genre, just so long as it’s emotionally tapping me. Then I let the ideas start flowing. I start with lyrical ideas. Once those are established I take my guitar or ukulele or sit down at the piano and start playing and singing. Lyrics and music have to come at the same time for me, so while I first work out the basic lyrical themes, I have to have music happening at the same time to really solidify them. I then work on getting different parts of the song worked out… Verses, a chorus, and sometimes a bridge. Once it’s all basically mapped out, I go over the lyrics again and again trying to get them really tight. I revisit songs for weeks usually to make sure they are saying just what I want them to say, and meaning just what I want them to mean. They change a lot, and are usually totally different by the time I’m done with them. Then I record a rough draft in garage band and send it to my HusBand. He takes it and works his producer magic… It takes Mingo a week or two to get the track just right. And then we record vocals. The whole process takes weeks but is totally worth it in the end when we have a song that we’re both super proud of and that I’m happy to present to the person who commissioned the song.

Your music has been played on some popular TV shows like Brothers & Sisters (ABC), Grey’s Anatomy (ABC), One Tree Hill (CW), Astronaut Wives Club (ABC) and Working The Angles
(NBC). How does that feel?

It feels pretty great for a few reasons. First of all, I’m a fan of most of these shows. I watch a lot of TV while I work on other projects. I just like having something on while I paint, or clean, cook or whatever I’m doing. So it’s super sweet to hear one of my songs just accentuating an already great show. It’s also a great source of income. I have two kids now and am a real adult with bills and mouths to feed! So publishing is a big deal.

What is on your current playlist?

I get obsessed and listen to songs/music on repeat, all day, every day till I know the songs inside out. Today I’m obsessing over: Randy Newman, specifically Pixar sound tracks (my three year old is a huge fan) Kacey Musgraves, specifically everything.

Do you have any plans of doing a tour in the near future?

No! Touring does not work for me at this point in my life. Right now my heart is at home with my two beautiful little boys and my HusBand. And I am loving writing Our Songs. I’m staying put. I know that as an artist you’re always supposed to be heading out on the road or just getting off the road. But I’m writing my own rules with Our Song. Touring is out, writing awesome songs for beautiful people and hanging out with my family is in!