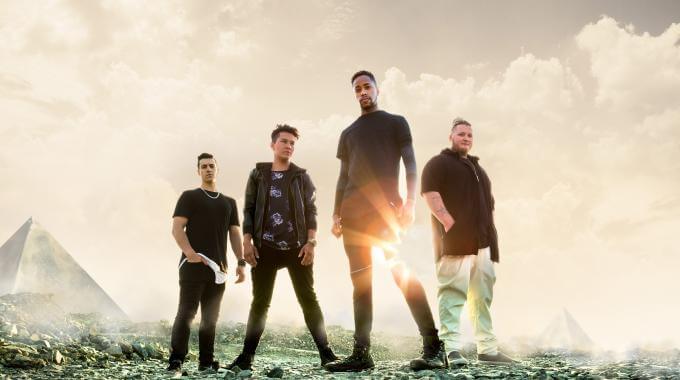 Sarah had the opportunity to chat this summer with Neon Dreams’ DJ Corey LeRue. They are coming off, and again heading on tour very soon. They also have a brand new EP set to release on Friday! Check out what he had to say about their amazing career to date, and what’s in store for them!

SM: How has the tour been?

ND: It’s been amazing! We went right from Sydney, NS all the way to BC with radio stops along the way. We shot a new music video for our song, “Marching Band” and we’ll do another video for the song, “Be Your Heart” in BC. We actually have a consistent amount of shows right up until November. It’s been a pretty hectic and busy time, but also very amazing!

SM: How did you and the guys come together to form Neon Dreams?

ND: It’s funny actually. I met Adrian who is our drummer, we played in high school band together; I used to play trumpet and he was percussion at the time. SO we started making music and recording things here, and there. He was always in rock bands with the other two guys in the group. I knew who they were, and they knew who I was. It was kind of an organic thing where we just started to mess around and make music together. One day they said, “Hey, we’re gonna try this new thing that’s more of a produced track and pop sound. So that was the project before this and then we finished that and then we had a show on Labour Day in Halifax, NS and we didn’t even have a name! So with us writing songs a lot, we came up with the concept of Neon Dreams and it stuck.

SM: Even in your early beginnings, I read that you had immense support from EDM powerhouses like Benny Benassi. What was it like for you to get that kind of recognition so early in your career as a group?

ND: It was really cool. We were just young people who were working really hard who were trying to network with as many people as we could, and we would do songs with as many people as we could, and do as many shows as we could. All of a sudden we then fond ourselves sharing the stage and studio with people like Benny Benassi, and doing something with Diplo. This was enough for us to say okay, this is enough fuel, let’s take a stab at this. Even though we started doing this almost three years ago, we knew how to DJ with a band. It kind of took people for a spin, because at the time when we started DJs were it, but we were doing the same thing with a full live band and a consistent singer. Taking the elements of a DJ and putting it together with a Rock band element made things very interesting and people responded very quickly.

SM: Your latest album has been out since late 2015, how as fan reaction been since its release?

ND: That album has been great. It was really the first full album we ever did ever, so that will always have a place in our hearts. Last January, “Love Experts” was the single that we did, and was ourt first taste at Canadian Radio, and the Top 40. Also, we’re releasing a new EP on August 26th and our latest single, “Marching Bands” featuring Kardinal Offishall will be the first single off of that project. So we’re excited about the new bundle of music.

SM: On the latest album, do you have a favourite track?

ND: I’ve been asked this question before, and it’s like having to pick your favorite kid! “Marching Band” is kind of the kick-started a whole new sound for us. We also have this other song Called, “Find A Way” which is kind of a fresh tune that we recently finished that I am really excited about, too. There are also five other songs outside of those that kind of hold a place where, I feel we are the best we’ve even been musically, and also the best we’ve ever been with regard to out positive state of mind. I really think that will reflect as well with this project.

SM: Listening to the record, I noticed that there was a lot of diversity in terms of your sound where one song can be a real danceable pop song to where another could be more aggressive. Is diversity on an album very important to you?

ND: Yes, I think so. Even with this new project, it’s very diverse. Even though it’s only been a year, we are getting older and our tastes in music and sound are changing. We’re seeing where electronic music is evolving to, but at the same time, the songs are very diverse, and I think that comes from a very diverse background of musical influence. Frank is very influenced by One Republic, and Coldplay. Adrian, our Drummer loves Blink 182, and a lot of Punk rock. Then, you have me that come from an era of listening to artists like 50 cent and G Unit. Matt, kind of shares the background of the other guys, but we’ve all somehow come together with a shared love of electronic music, and when we come together to create that’s what makes us diverse. The difference from the last project is that there is even more of a “sound” where not every song is the same, but you can definitely tell that it’s a Neon Dreams song.

SM: Do all of you as a group write, and produce your own music?

ND: Yes, we definitely produce and are involved in all aspects of the writing. We also write sometimes with other people. We’ve written with a fellow East Coast guy, Dylan Guthro, Carlton Stone and there are a few other writers that we collaborate with because we love their energy and work ethic and welcome a different perspective. Everything is always done in-house as far as production and mixing, mastering.

SM: What’s on top for the rest of the year?

ND: We finish the tour and then we’re back for about a week and then we start a full-fledged East Coast Frosh Week tour from NFLD to Quebec for about another three weeks. There are some things that I’ll personally be taking on. I’ll be headed overseas for a week, and then we’re planning now for our next run across Canada for late October into mid- November, and then we’re into Christmas so we’re pretty booked up tight until the end of 2016!

To find out where you can catch Neon Dreams on their upcoming dates, visit http://neondreams.ca/shows/

You can purchase their music directly at http://neondreams.ca/music/