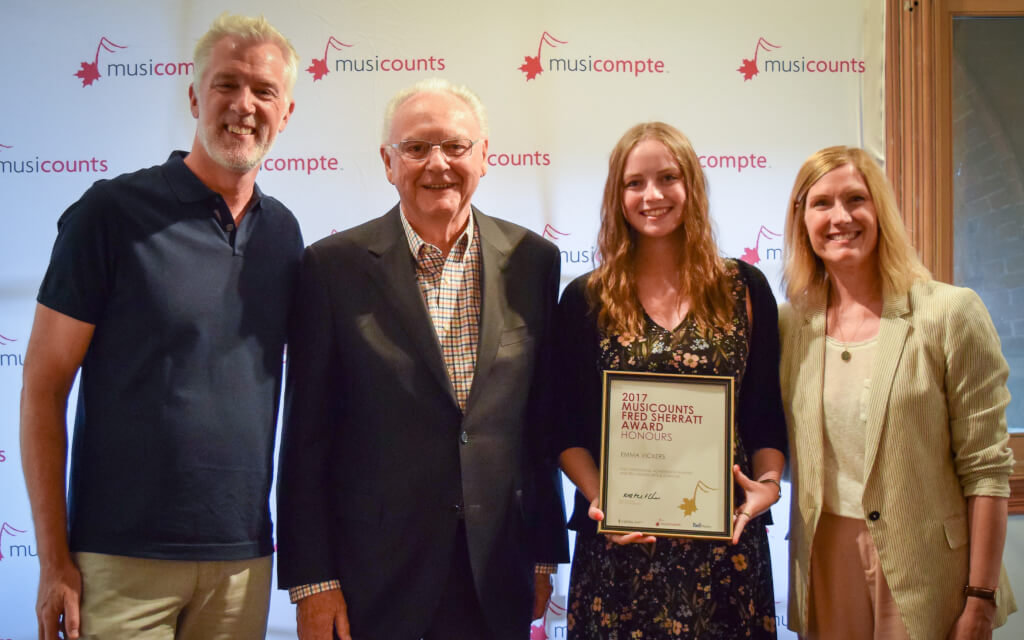 On July 12, MusiCounts, Canada’s music education charity associated with the JUNO
Awards, hosted an intimate Toronto tour to celebrate the 2017 Fred Sherratt Award recipients. The Award recognizes the outstanding achievement, talent and leadership of graduating students selected from post secondary music programs across the country. The celebration included a tour of media powerhouse Bell Media headquarters, Revolution Recording studio, iconic venue Massey Hall and label and management company eOne & Last Gang Records. Award-winning broadcasting pioneer Fred Sherratt was on hand to congratulate the 12 recipients and present them with their awards.
“It’s a great honour to celebrate and be a part of these awards,” said Fred Sherratt. “It’s inspiring to see so many bright young graduates gaining insight from the industry leaders as they begin their careers in the world of music. I’m certain there is a great future ahead for all 12 recipients.”
First launched in 2008, in partnership with Bell Media, the annual award is named in honour of broadcasting pioneer Fred Sherratt. Each recipient received a $2,500 bursary, a trip to Toronto to tour notable music industry locations and attend a networking mixer at the historic Gladstone Hotel with music mentors that included, Jennifer Hyland, Senior Manager of Music Licensing / TV & Film Sync, Adam Burchill, Director Global Partnerships Music & Live Entertainment, MLSE. Vanessa Smith, Manager Education & Outreach, The Corporation of Massey Hall and Roy Thomson Hall and Samantha Pickard, President, Strut Entertainment.

I had the chance to speak with Emma Vickers, the local recipient of Antigonish, N.S.

Jenn: Let’s start off by telling us a little bit about yourself?
Emma: I am originally from Bathurst, NB and have been living in Antigonish, NS for the past 4 years while studying at St. Francis Xavier University (St. FX). My journey into the world of performing arts began at the age of 6 at my elementary school and within my church community. I have been performing ever since whether it be singing, dancing, acting or all three.

Jenn: What year did you graduate from St. FX? What did you study?
Emma: I graduated from St. FX May 2017. I completed a Bachelor of Music Honours degree in Jazz Studies with my primary instrument being vocals.

Jenn: How did it feel to have MusiCounts honor you with this year’s prestigious Fred Sherratt Award?
Emma: I was shocked and honoured to have received the prestigious Fred Sherratt Award this year. As I am continuing my studies this coming fall, the award is greatly appreciated and I am very grateful to have been selected from a number of other outstanding candidates.

Jenn: How was your trip to Toronto to tour notable music industry locations and attend a networking mixer? Can you tell us about that experience?
Emma: My day of touring and networking in Toronto was fantastic. We were given private tours of recording studios, an inside look with Bell Media, meetings with members from eOne and a tour of Massey Hall. One highlight was standing centre stage in Massey Hall and looking out into the audience – a view countless great musicians have seen over the years. It was also exciting to meet so many other young adults who are ambitious, talented and like-minded with their sights set high on careers in performing, composing, recording and more.

Jenn: What are your future plans?
Emma: I hope to pursue a career in live performance, whether it be in voice, acting, dance or all three. I am attending the Canadian College of Performing Arts in Victoria, BC in September to complete a two year Enriched Performing Arts Diploma. Here, I wish to compliment the knowledge I have obtained from my time at St.FX with further education in the other aspects of performing arts in order to succeed in this highly competitive industry.