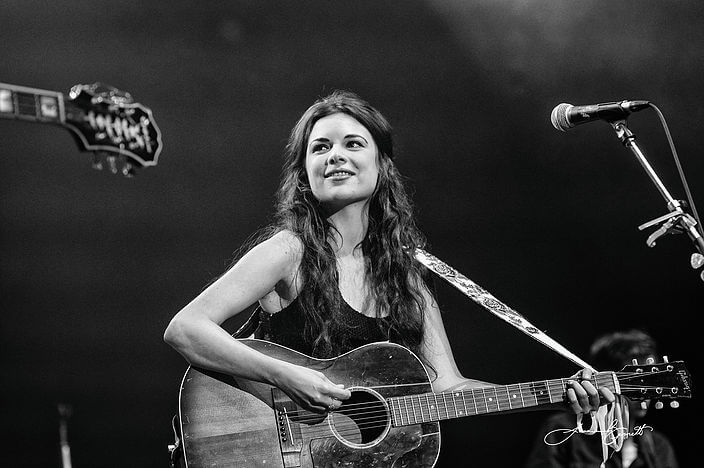 Sarah had a chance to sit down with fellow East Coast native, Whitney Rose and talk with her about her songwriting, her newest album, “Heartbreaker of the Year,” her recent stint on tour as opener for Dean Brody and Paul Brandt on the East Coast leg of the Road Trip tour, and more!

SM: You have had a pretty great fall this year, having toured with Dean Brody and Paul Brandt on Eastern leg of the Road Trip Tour! How was that experience for you?

WR: It was pretty insane actually. It easily the largest audience I have ever played for, so that was really cool. It was cool seeing what I could do on a much larger stage than what I am used to. It was awesome. Even getting to see them (Dean and Paul) perform night after night was super cool, and really inspiring. They’re awesome guys so it was a really enjoyable run. It wasn’t too long, it was 5 shows that I played with them. But it was an amazing time.

SM: How were you approached about the tour?

WR: When the tour was being planned, they wanted to get a few different female opening acts, and so it ended up being divided between myself, Lindi Ortega, Jess Moskalue, and Madeline Merlo. I can only assume that I got the East Coast date because I am from PEI. It was through by booking agent, so you can imagine that it was a pretty cool phone call to recieve. Hmmm, “How’d you like to play an arena?” “Oh, I’d like that very much!!”

SM: Your new record, “Heartbreaker of the Year”, was released earlier this year, how has the reception been?

WR: It’s been very cool. We were really lucking out with press we’re getting for it. We received really kind reviews from the New York Times, which was super cool. Rolling Stone did a couple of pieces on it. People for the most part seemed to really like it. It’s really cool also that it’s getting some attention outside of Canada, as well. It’s the first time tha I have gotten any attention South of the border, as well as in Europe.

SM: That in itself is such a huge accomplishement because it can be really hard for some Canadian artist to break through that barrier and reach the US Markets. Congratulations!

WR: Thanks! Not that Canadian attention is not welcomed, or unnoticed, but its been the coolest thing ever to garner attention outside Canada’s borders.

SM: You got to work with some pretty amazing artist on this record, particularly Raul Malo. How did that collaboration originate?

WR: I also have my booking agents to thank for that one, hahaha! I was put on a bill with The Mavericks when they were in Toronto for a one off in September 2013. I fell in love with them!  I had been a fan previously, but I had never seen them play live, and seeing their live show for the first time was so cool. Their live show is probably the best I have ever seen. I am a little biased of course because they’ve become really good friends. But yea, I was put on that bill,  and they liked what I did as well and eventually invited me to join their Eastern Canadian tour a few months later, and a Western Canadian tour a few months following that. At this point we had become pretty good friends and I had ebough material, which ended beocming, “Heartbreaker of the Year.” After a show in Winnipeg, I worked up the courage to ask Raul to produce it and he obliged, and for me that was a really cool moment.

SM: You guys (Whitney and Raul) actually performed a few tracks together on the record!

WR: Raul and The Mavericks are kind of all over the record, doing most of the backing vocals. I knew I wanted to do some covers on this record, for a few reasons. I really love covering other artists, but also because I wanted to kind of help an audience make sense of what my record is and where my inspirations lie, and so I wanted to have a country cover that people would recognize, and a pop cover that people would recognize and have it kind of be a glue holding  my songs togther. The pop song we decided to do was, “Be My Baby.” It was kind of a spontaneous decision to do it as a duet. WHen you have one of the best vocalists there and willing to sing – why the Hell not?!

SM: You wrote all of the original songs on this record?

WR: Yes. No, I haven’t gotten into collaborations as far as songwriting goes. It’s something I am interested in and want to try to do while I am here in Texas. There are so many talented songwriters here. I have always been curious about the world of co-writing, so I might give it a try, but I usually write alone. It usually requires solitude.

SM: Do you have a personal favorite song from this record?

WR: I really like how the title track came together. It’s totally different than how I write it. I kind of write it as a kind of swingy-country thing, and it almost ended up having more of a jazzy feel. It’s a lot of fun to perform that one live. I think the production of that one was really cool in how it turned out.

WR: We are currently planning out the beginning of 2016, so I will be back on the road, as per ususal. I will also be in the studio early in the new year as well to record a new record as well!