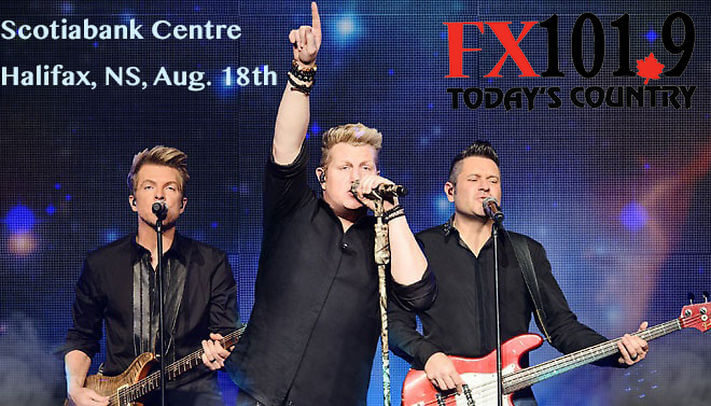 Sonic Concerts continues to bring major musical acts and events to the Maritimes.  Rascal Flatts will be at the Scotiabank Centre in Halifax, NS on August 18th, 2016 before heading over to the Eastbound Hoedown Country Music Festival in Newfoundland.

Presented by Country Music Radio Station FX101.9 Rascal Flatts will tear up the stage making for one hot summer for Country Music fans.  “Since their musical debut in 2000, Rascal Flatts has over 22.5 million albums sold and over 28 million digital downloads and delivered 15 #1 singles to the top of the charts.Rascal Flatts is the most awarded Country group of the past decade, earning over 40 trophies from the ACAs, ACMs, AMAs, CMAs, People’s Choice Awards and more. As one of the hottest-selling acts on tour in any genre, they’ve sold over 7 million concert tickets, and counting.”

To top it off , Jason Blaine, will be the opening act for Rascal Flatts.  Blaine is no stranger to Halifax where he performed recently at Casino NS Schooner room on his Three’s a Crowd Tour along with Tebey and James Otto.

Jason Blaine is also an accomplished country musicican and Canadian to boot. “His first single in 2003: The tellingly titled That’s What I Do. His independent full length debut, While We Were Waiting, came out in 2005 and included the Top 25 singles Heartache Like Mine, While We Were Waiting and What I Can’t Forget. The follow up Make My Move arrived in 2008 on Koch (now eOne) and hit the Top 5 on the Canadian country

chart thanks to singles like the Top 10 Rock in my Boot and Top 5 Flirtin’ With Me. On 2010’s Sweet Sundown, he dug deeper, thanking overseas peacekeepers on Heroes. And on 2011’s Life So Far, he pushed himself even harder with heartfelt songs like You Can, Til’ the Sun Burns Out and They Don’t Make Em’ Like That Anymore, a tribute to his grandfather. That song helped turn 2012 into a banner year for Blaine, who earned CCMA nominations for Male Artist, Single of the Year, Songwriter, & Producer. Life So Far turned out three Top 10 singles, including On a Night Like This, Cool and They Don’t Make ’Em Like That Anymore, who won Single of the Year at the Canadian Country Music Awards, and whose video hit No. 1 on CMT Canada.”