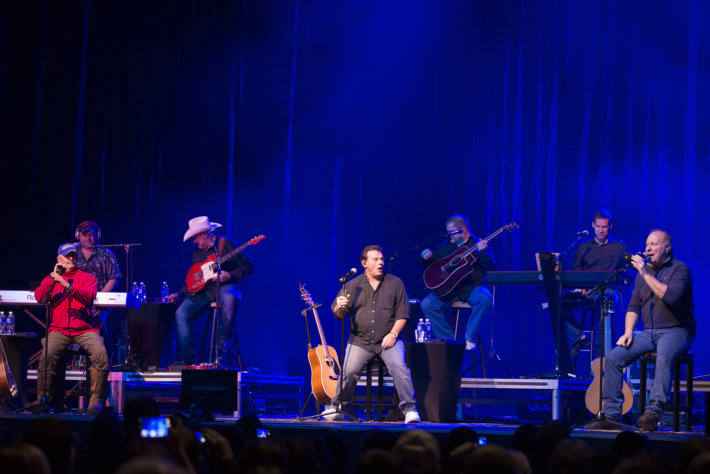 The East Coast Production Group has been bringing in the Roots and Boots tour every year. This was our first year of covering the show and to sum up our experience would be “amazing”. It was an absolute fantastic show.

Aaron Tippin, Sammy Kershaw and Collin Raye are incredible. Music has always been a huge part of my life since I was a little girl. I can remember growing up listening to these three artist among many others. When I saw they were coming to Truro this year, I had to go.

As they came out on stage, the crowd got loud. Aaron Tippin started the concert off singing his debut single “You’ve Got To Stand For Something”; Sammy Kershaw’s first song was “Yard Sale” and Collin Raye started with “Little Rock”. Every single song they sang, the crowd sang.

In between singing, they would tell jokes, stories and pick on each other. They were hilarious, it was just like a “kitchen party” and they were very interactive with the crowd.

Collin noted to the crowd that Aaron wrote every single hit song he had, that is increible .
They all love Canada, Collin said “Canada’s been treating us right” and Sammy said “they sure love their country music”.

I had the chance to interview Sammy a few weeks prior to the show where I had a chance to ask him about the Roots and Boots tour. He said it’s something he came up with a few years ago for 90’s artists to get together, tour and do what they love. Many times Sammy says he loves country music and will sing country music till the end.

Over all, the concert was a hit. These 3 artists are well respected and to sit there and listen to them perform is exactly like hearing them for the first time on record. Their voices are incredible and they still have that fire in their performances.

The crowd cheered, yelled and clapped until they came out to do an encore.
Aaron covered a Johnny Paycheck song; Sammy was a close friend with George Jones and performed one of his songs and Collin Raye covered a Glen Campbell song.

We look forward to the next Roots and Boots tour.