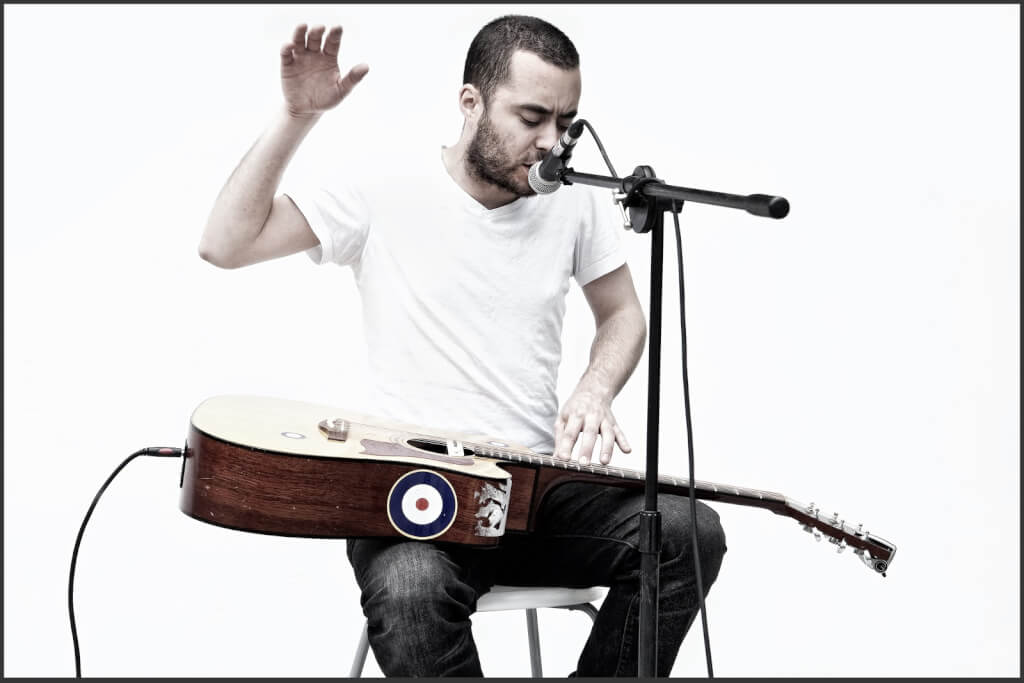 We got to catch up with Jake and ask him a few questions. We look forward to seeing him at Stan Rogers Folk Festival.

Jenn: First of all, tell us a little bit about you

Jake: “I’m fairly messy, I pick my nose, I like Rubik’s cubes, I like barbershop quartets
Still live at home with mum and M-dog, I like cake, I don’t believe in regrets”

The first song on my first album was an attempt to get the ball rolling with that question, it’s interesting to see what’s changed since then. I am definitely less messy, no longer live at home with my mum, the dog’s not doing so well and I even tried to kick the cake habit. The rest is true though, for now.

Jenn: Can you tell is about your writing style

Jake: My writing style is usually to write a song in 10 minutes, then bash my head repeatedly against a page writing lyrics until I’m rocking gently in the foetal position. I like using acoustic guitar lap-tapping styles and other sort of sweep picking / fingerstyle techniques, or three chords and the truth, whatever it needs to be.

Songwriting is just meeting yourself every day. Who the hell is this guy? What’s on his mind? It can be tricky because sometimes the more you shine a light on it, the more it changes. It’s a slippery bar of soap.

Jenn: Tell us about your newest album “The Manual”

Jake: The Manual was shining floodlights on it with a team of Navy Seals holding it down. I was feeling a little lost at the time, questioning a lot, looking to write something deeper, more arranged, more ambitious than I had before. The Manual was me challenging myself to nail the soap against the wall.

It’s also exquisitely produced which I can say cos I didn’t produce it. Guitars, strings, choirs, other weird noises, and a couple of years of songwriting at the heart. The CD is produced like a hardback book with nothing but ‘The Manual’ written on the front. It was all quite a trip.

Jenn: Who are some of your musical influences

Jake: Mostly not artists I write similar music to. The last three gigs I went to were Prophets of Rage, The Burning Hell and Sheryl Crow. And last night at a festival I was playing I was jigging away to a band playing “What shall we do with the drunken sailor”.

My heroes really are anyone who actually realises their intent, gets it over the finish line of a stage or a record or a song. Every time that happens it’s a victory. Right now I’m listening to a lot of Kate Tempest, Anais Mitchell and some metal too. I admire Louden Wainwright III’s career a lot.

Jenn: Will this be your first time in the East Coast

Jake: The first of many I hope! I’m trying to line up another trip round the Maritimes for later this year. Everyone says it’s so beautiful and there’s such a rich tradition of songs and stories. I’ve done a couple of shows with Dave Gunning and some ballad singers from PEI in the last year or so, and feeling excited to tap into the culture a little more.

Jenn: You are playing some big festivals this year, how do you feel about that?

Jake: Well I’ve played some really big shows and I’ve played some really little shows. I once played a show in France where the only person in the room was a guy reviewing it for the local paper. It’s the same principal however many are there to hear it, you look to connect with people, be part of valuable experiences, play your heart out.

That said it’s nice when the big shows come around. I’ve got a few thousand to play to tonight at North Country Fair, StanFest will be a big one too. Vancouver Folk Festival, Islands Folk Festival too, it should be a great summer.

Jake: If you’ve made it this far, why not listen to a song:
https://open.spotify.com/artist/5EfWj07dkgVpJ6Y5ATHxImhttp://bit.ly/feetvid