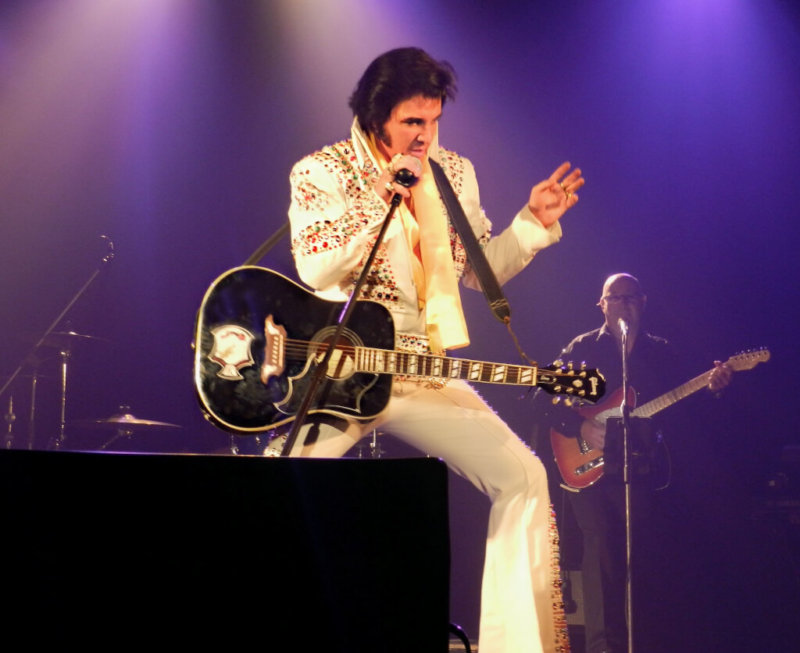 Commemorating the 40th Anniversary of the passing of Elvis Presley, International World-Champion Elvis tribute artist, Thane Dunn and his Cadillac Kings will perform seven shows throughout the Maritimes in August – October.

Special guest for the shows, coming from Tennessee, is the legendary Bill Baize. Baize, famed tenor singer of JD Sumner and the Stamps Quartet who performed with Elvis from 1971 until 1976, said of Dunn, “He is the closest thing to Elvis I’ve ever seen and it is a pleasure to perform with him.”

I had the chance to chat with Thane about his upcoming tour and how he got started.

Jenn: First off, tell us how you got started impersonating Elvis?
Thane: It probably started at age 5 or 6. I had watched a few of his movies with my mother who was a fan. Then my first girlfriend had a lil’ record player and we would dance on her bed to Return to Sender over and over again for hours, I guess that hooked me.

Jenn: How long have been performing?
Thane: I have loved the spotlight since I was a kid and was front man for a few bands in High School but I’ve been performing my tribute to Elvis full time since August 16, 2009.

Jenn: Tell us a little bit about yourself and some of the places where you’ve performed.
Thane: I’m an only child who always had a big imagination. I’ve always liked to sing, draw and write songs and I love telling stories. I have always been a big Elvis fan but never imagined I would be doing this let alone as a living. I don’t have an Elvis shrine in my home and I don’t run around thinking that I’m Elvis contrary to popular belief… lol.

Jenn: Can you tell us about this Cruise you have coming up in 2018?
Thane: Our Elvis Dream Cruise is very special. It’s first class all the way. We are travelling on the Allure of the Sea, which is one if not the top Cruise Ship in the World for seven nights to the Caribbean. I will have my full band plus Mr. Bill Baize who performed with Elvis from 1971-76 and is now touring with us. We will be performing shows that Bill experienced first hand with Elvis so we will re-enact the Aloha from Hawaii Satellite Telecast, the MGM Documentary Elvis on Tour as well as a full Elvis Gospel show (Bill was part of JD Sumner and the Stamps Gospel Quartet) and an all request show. There is so much to do on board its like Disneyland on the ocean. People can check out www.elvisdreamcruise.com for more info and to sign up.

Jenn: How does it feel to have a coat that was originally made for Elvis named after you?
Thane: To have a coat originally made for Elvis named after me by the man who made super cool clothing for out of California rock icons, Jim Morrison, Jimmy Hendrix and Janis Joplin to name a few really freaks me out yet leads me to believe that I’m doing something very right. When I started doing this I wanted to give people a taste of what it would have been like to see the real Elvis live in what I consider to be his prime: the early 1970’s. To take the joke out of a cottage industry full of bad wigs and fake sideburns that I believe mock my boyhood hero and are no tribute at all. From Mr. Morgan to rock photographer John Rowlands, who was hired by RCA in 72 to film Elvis, to the fact that we now have a man who actually toured with Elvis now touring with us it’s the greatest feeling in the World.

Jenn: How did you become International World-Champion Elvis tribute artist?
Thane: It didn’t happen overnight. I’ve always been a decent singer with good pitch but I’ve taken a’lot of singing lessons and opera lessons even to duplicate the amazing voice Elvis had. I’ve always been told I looked like Elvis and dying my hair L’Oreal Blue Black really made the whole look very believable. I’ve studied his every move from his facial expressions to the way he walks down to what his hands are doing during a specific song. My interaction with crowds has always been good but I took every chance I could to be in front of people to become a real showman from a to z with all the bases covered. They didn’t call Elvis the King for nothing. He was a master showman and no one will ever come close to having his skills and natural ability but I do the best I can and it works.

Jenn: Is there anything else you would like to add?
Thane: I equate what I do to an actor playing a role. I don’t take myself serious but I take what I do serious. I have the utmost of respect for Elvis who has been an inspiration to me my entire life. He has made me a better man and taken me to places I would have never been and met people I otherwise would have never met because to this day almost 40 years after his passing he is perhaps loved even more than when he was alive. I get to make a living making people happy and that my friends is what it’s all about.
We have done lots of cool things for Elvis fans from giving away a stuffed hound dog that Elvis threw into the crowd in Vegas during the Elvis Summer Festival back in ’72 to last year giving away a trip to Hawaii. This year to mark the 40th Anniversary, we will be giving away, no purchase necessary Elvis Presley’s actual autograph with certificate of authenticity signed by Marty Lacker, one of the infamous Memphis Mafia. All you have to do is go to my website and fill out a ballot. Good luck and hope to see you at a show.