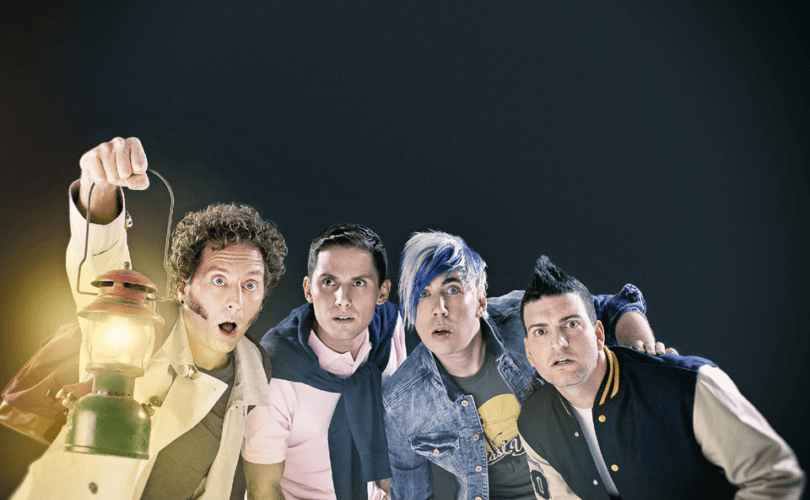 Multi-Platinum selling progressive pop band Marianas Trench have announced their second headlining tour in Canada this year, “Marianas Trench and the Last Crusade,” which kicks off on November 1st in Prince George, BC at CN Centre. VIP tickets will be available on Wednesday, September 7th at 10 a.m. local time. General admission tickets will go on sale to the public on Friday, September 9th at 10 a.m. local time. Go to www.marianastrench.net for more info and to purchase tickets.

The 15-date tour will showcase new material from their latest released fourth studio album, Astoria (604 Records/Sony) which echoes one part 1980’s fantasy adventure film and one part classic Marianas Trench. It honours classic coming of age stories, and reflects on frontman Josh Ramsay’s own personal journey that took him from the highest high to the darkest point in his life and career. “This album is about completely falling to pieces, and picking yourself back up again,” Josh explains. “We took the hardest two years of my life and made it into something beautiful, and our best work to date.”

Excited to be returning home to Canada, the Vancouver-based four-piece announces, “Grab your treasure map and your compass cuz we’re going on an adventure! We can’t wait for our coast to coast quest for the holy grail of rock…and all of Canada is invited!”

Over the last decade, Marianas Trench constantly raised the bar for quality music, which translated into their explosive live shows. They have built their name on relentless touring in Canada and globally, headlining tours in the USA, Australia, New Zealand, and soon in Europe for the first time in September-October 2016.

Since their 2006 debut, Fix Me, Marianas Trench have had two Certified Platinum-selling records (Masterpiece Theatre, Ever After), chart topping hits including ‘Fallout,’ ‘Haven’t Had Enough,’ and ‘Stutter,’ garnered multiple SOCAN and MMVA Awards, number 1 videos on MuchMusic, and JUNO nominations, and won the 2013 JUNO Award for Group of the Year. Ramsay also received a Grammy nomination in 2013 for co-writing and producing Carly Rae Jepsen’s breakthrough smash “Call Me Maybe.”

Below is a full list of tour dates for Marianas Trench and the Last Crusade tour.

Tickets for the Halifax show range from $31.00 – $71.00 (including tax and applicable surcharge) and will be available at the Ticket Atlantic Box Office at the Scotiabank Centre, at participating Atlantic Superstore outlets, by calling (902) 451-1221 / 1-877-451-1221 and online at ticketatlantic.com, evenko.ca and livenation.com.

Tickets for the St. John’s show range from $31.50 – $71.50 (including tax and applicable surcharge) and will be available at the Mile One Centre box office, by calling (709) 576-7657 and online at mileonecentre.com, evenko.ca and livenation.com.

Doors open at 7 p.m. and the show is for all-ages.

About evenko:
evenko is a Quebec company which has become the most important independent promoter and producer in Canada. Presenting more than 1,200 musical, family and sporting events annually throughout the province of Quebec, Atlantic Canada and the eastern United States, evenko plays host to the biggest entertainers in the world and invests in the development and promotion of Quebec artists. evenko is also the creator and producer of four festivals: Osheaga Music and Arts Festival, Heavy MONTRÉAL, IleSoniq which are all held at Parc Jean-Drapeau in Montreal, as well as the Festival YUL EAT. evenko is also the exclusive manager of the Bell Centre, the Corona Theatre and the future Place Bell in Laval. In January 2016, Pollstar, the entertainment industry’s most respected source, ranked evenko as the top promoter in Canada and the 8th most important promoter in North America. The evenko trademark is the property of L’Aréna des Canadiens Inc.