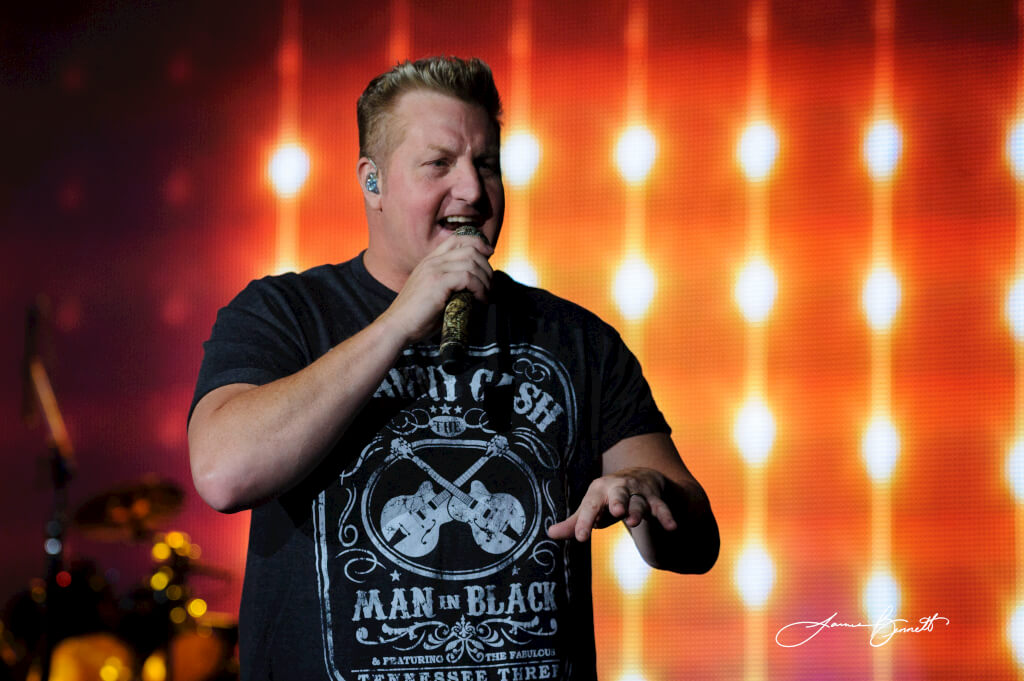 Last night was a night of great country music here in the Maritimes – Halifax, NS in particular. It was rocked by two incredible acts – Candian Country Music Award winner Jason Blaine and multiple Country Music Association award winners Rascal Flatts. The Scotiabank Centre in Halifax was packed to the gills with enthusiastic and excited country fans awaiting was was really a very incredible show.

The centre last night was a packed house of almost 10,000 people, but it felt like one of the most intimate shows I’d been to in a long time. Both Blaine and Rascal Flatts were so engaging to the crowd during their sets, and the crowd was feeling so in touch with everything they were putting out. It was a rare and amazing moment that I was so happy to have witnessed as a writer, and most importantly, as a devoted fan.

Jason Blaine, the opening act burst onto the stage filled with pure energy and with his songs like “Cool”, “Country Sides”, fan favorite, “Rock It Country Girl” and “Dance With My Daughter, ” written in dedication to Blaine’s daughters. He also debuted his newest single, “Back to You” to the Halifax crowd. During his performace of his award winning single, “They Don’t Make Him Like That Anymore,” written in honour of his Grandparents Harvey and Marilyn Rutz’s 60 year marriage, Blaine had the crowd light up their phone in memory of his grandfather, Harvey as it was announced by Blaine that he had actually passed the previous summer. It was said by Blaine in that moment that it was a career memory for him and the crowd, including Blaine was truly moved by it. Blaine always enjoys playing in the Maritimes, and its eveident that his fans enjoy it too.

Headlining act Rascal Flatts hit the stage not long after for an amazing set as they brought their Rhythm and Roots Tour to Halifax, NS last night. The power vocals of Gary LeVox, accompanied with the incredible harmony vocal and instrumental stylings of JoeDon Rooney and Jay DeMarcus never missed a beat during their set. They opened, quite appropriately enough with hit single, “Summer Nights” and followed with an incredible array of hits from throughout their 16 year career that had the crowd on their feet, clapping and singing along all night. This included their latest single, “I Like the Sound of That”, written by Shay Mooney of Dan + Shay, another incredible vocal group. What was different about this set too, was the use of various electronic sounds on some of their songs, noteably during their song “Stand” that eventually morphed into Phil Collins’ “In the Air Tonight.” It the crowd some variety and made it so that it wasn’t JUST a country music show, and was a really cool arrangement of sound. What really brough the house together was JoeDon Rooney’s guitar solo of the Canadian National Anthem, “Oh, Canada” just after it was announced that Canada had garnered another Olympic Gold medal at the Rio Games.

It was an all-around amazing night of music from two powerhouse acts that Halifax will not soon forget.

Set List:
Summer Nights
I Like the Sound of That
Banjo
Medley: Come Wake Me Up/I Melt/I Won’t Let Go
Life Is a Highway
Why Wait
Medley: Stand/In The Air Tonight
Don’t Stop Believin’
Faithfully
Bless the Broken Road
Open Arms
Oh! Canada (Joe Don Rooney Solo/accompanied by Scotiabank Centre Crowd)
Rewind
Fast Cars and Freedom
Love You Out Loud
My Wish
What Hurts the Most
Take Me There
Here’s To You

Encore:
Me and My Gang