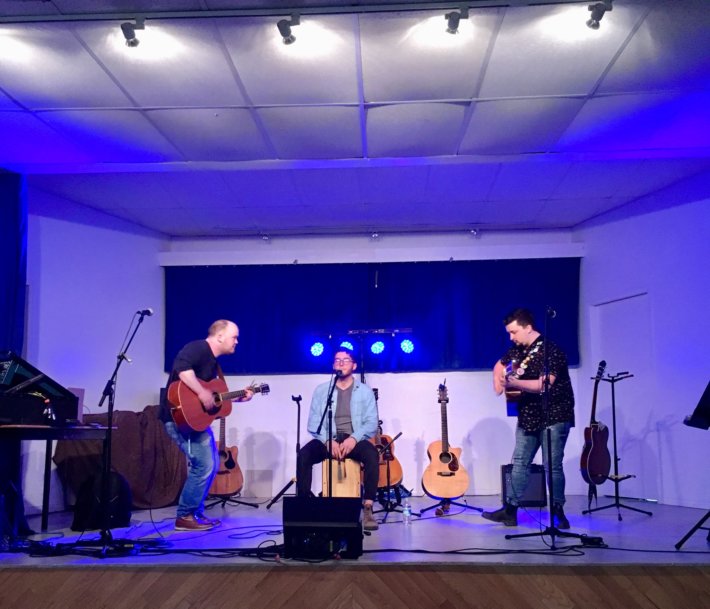 Did you ever collect anything as a kid? Well, I was the kid who collected rocks. I collected all sorts of cool colours, shapes and sizes, but my favourite was when I scored a rock with sparkle. It was beautiful and eye catching. It was a hidden gem. The feeling I got when I found that hidden gem was excitement, satisfaction and thrill. That is exactly how I felt when I discovered The Travelling Nobodies.
The Travelling Nobodies (with two L’s, they assured me) is a trio of young men with ages ranging from 18 to 24 hailing from Antigonish (Clifton Pettipas), Canso (Peter Lumsden) and Country Harbour (Nathan Langley), and by the grace of the folk/rock gods, they found each other; and we are sure glad they did!
Recently, I had the opportunity to catch up with the guys after their show in Sherbrooke, Nova Scotia with opening act Parker MacIsaac and I have to say, their on and off-stage banter is almost as entertaining as their music!  A mixture of covers and originals, tales and stage presence was giving us all the feels! Here is what they had to say:
1.So, The Travelling Nobodies.  How did you come up with the name?
It’s funny because a few of us were all sitting around joking one day and someone said “you know, we’re pretending like we’re somebody’s but we’re really just a bunch of travelling nobodies” and it kind of popped around a bit and then all of a sudden it was the name of our group chat and so here we are! – Peter
2. How would you describe the genre of your band? Who do you sound like?
I think the music that we write is very kind of traditional, folk, rock and you know every show we play we kind of define our sound a little more. We are kind of experimenting with sound I guess. – Nathan
There is a lot of pieces at work here and so much different influence in each of us and then we come together and it all seems to come pretty easy for us. But it’s also a work in progress. – Clifton
3.Who writes your songs?
Well we all kind of take responsibility for different parts of songs. With “Life of the Party”, that was Clifton’s idea originally and then Peter and I each brought something to the table and then each of us say okay what can we do from here. – Nathan
4.What are your rehearsals like?
(Insert lots of laughter and hands thrown in the air haha) Well, it does get loud. Because I’m goofy, my roommate is goofy and then these guys come into our goofy life and it just, it dials to 11.  The nonsense! But then Nathan will come into the room and just command it! He’ll slap a wall or turn a light on. He definitely comes in as a dominant force. But he can be just a silly. -Peter
But I think when we get on to something that we know is good, we don’t stop. And that was that “Life of the Party” song.  It’s definitely born out of a love of music. You find something and you don’t stop. – Nathan & Clifton
5.Are we going to see you in the studio any time soon? How can fans-to-be gain access to you?
Ouuu, so I think after this summer when things start to get back to normal, come September/October, I think we will be ready to put some stuff down. There WILL be future ridiculousness! And we do have some concert dates coming up this summer and we will be posting them on our Facebook and Instagram accounts.  -Nathan & Clifton
6.What is the ultimate direction for your band? Are you seeking fame and fortune?
The idea of us making this a job was like “don’t even say it! Don’t speak a word of it!”. (First rule of fight club, is you don’t talk about fight club).  We don’t want to jinx anything.  I’m in this for the long run. I’m definitely ready to chase this as far as it goes. – Nathan
So there you have it! These amazing humans really are a force to be reckoned with. Their drive, dedication and talent are enough to keep you coming back for more! When they play a slow song and harmonize together, we fall in love with them and when they play a fun, fast paced song, we want to party with them!
They each bring something to the table and I can already identify them in different ways; my prediction being that Peter is the funny one, Clifton is the sweet one and Nathan.. well I’m seeing a mixture of quick witted humour and drive so the jury is still out on him for now! But what I do know for certain, is that the three of them together are pure magic.
The Travelling Nobodies are quickly becoming somebody’s, that’s for sure!
I ended the interview with a very important, serious question:
“A seagull walks through that door wearing a sombrero on his head and a harmonica around his neck. What do you say to him?” I got two simultaneous “hola amigos!” (Peter & Nathan), a sweet little “hi” (Clifton), a little confusion and a lot of laughter.
It’s been a pleasure, guys! See ya’s on the red carpet! 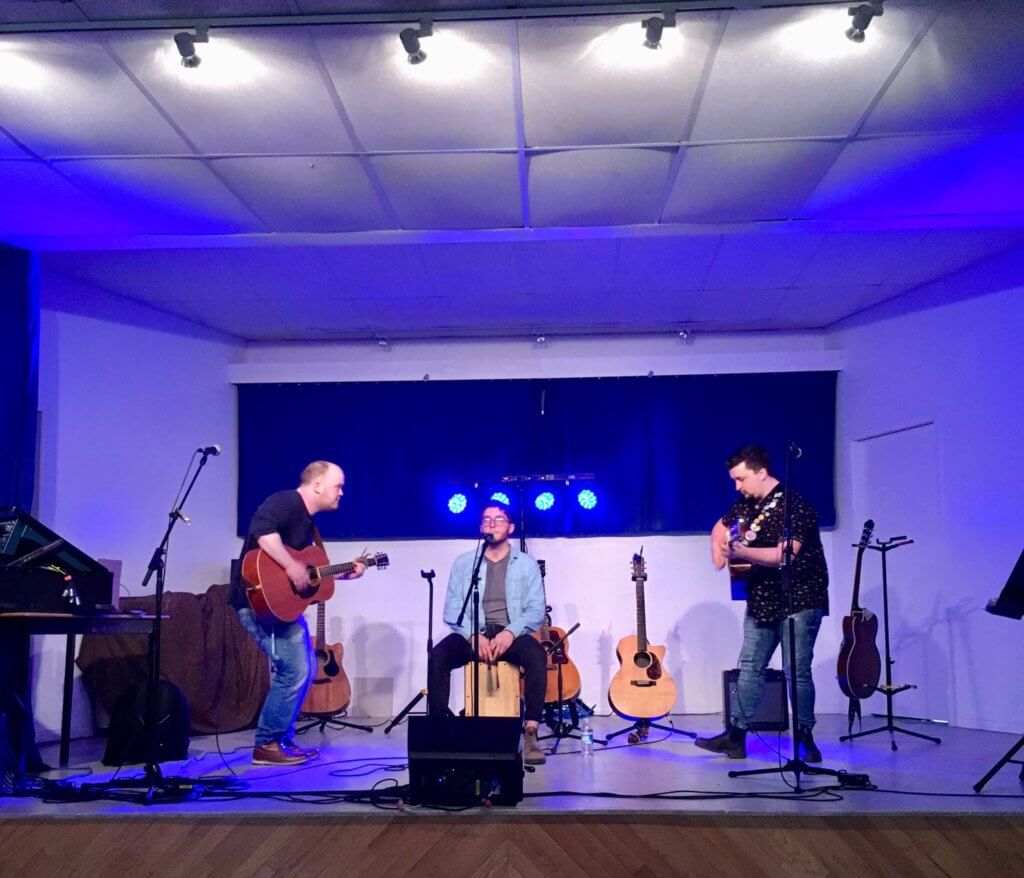 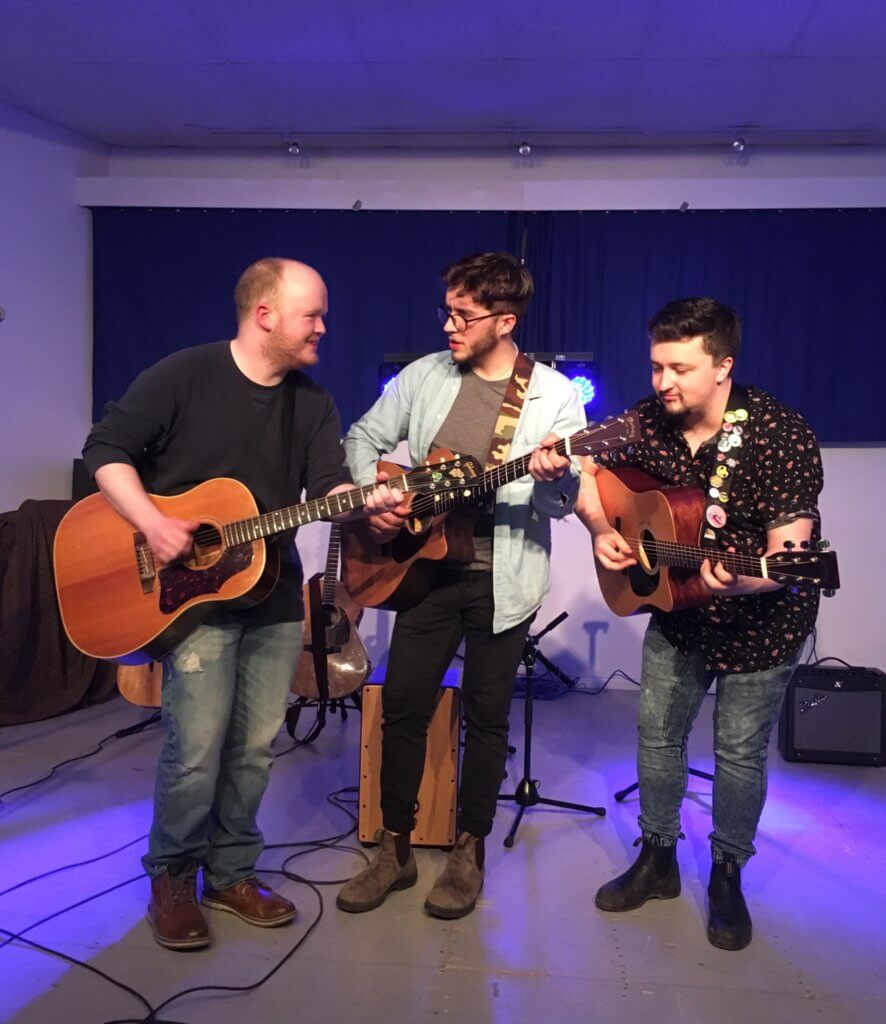