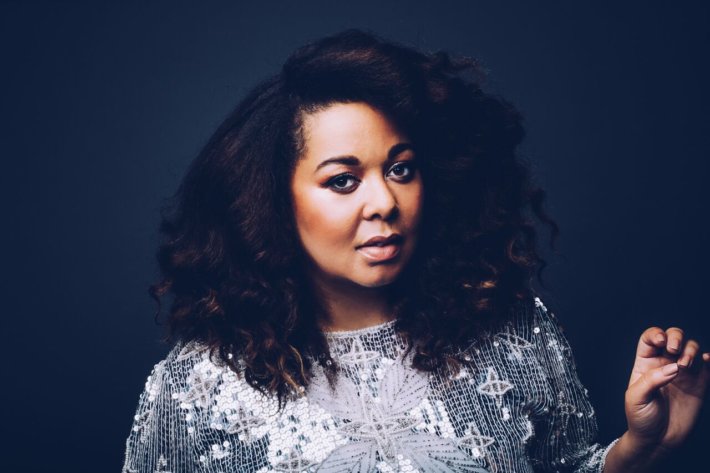 Nuela Charles is an alternative soul singer/songwriter based in Edmonton, Canada, known for her soulful vocals and captivating stage presence. Noted as “one to watch” by the legendary SoulTrain.com, Nuela has become an indie synch darling, landing 11 TV placements off of her debut album “Aware” alone!

Cited by the U.K.’s Metro publication as “cocked, locked and ready to be shot onto the world stage with a soulful voice that may one day fill the Amy Winehouse-shaped holes in everyone’s hearts,” Nuela has brought her distinct voice to various stages across North America. Over the last several years she has showcased at Canadian Music Week multiple times, headlined an evening at the Edmonton Jazz Festival, and even landed an opening support slot for Ziggy Marley.  Nuela’s debut American performance was at the uber-coveted “It’s A School Night” showcase in Los Angeles, on the personal invite of Chris Douridas, popular DJ and musical tastemaker at Santa Monica, California’s radio station KCRW, after he added Charles’ saxy “Unfortunate Love” into rotation.

The lead single “Crumbling Down” from her sophomore 2018 Juno Award nominated album “The Grand Hustle,” landed Nuela a nod from pop culture staple FADER.com, and spread nationwide as it landed on the CBC Radio 2 Top 20 charts for seven weeks straight. Adding another four (4) TV synchs to her name, notably on ESPN and the CW’s hit show “Jane The Virgin,” Charles is ready to release more of her fiery brand of cinematic soul.

Nuela’s upcoming single “Do It Right” (March 2, 2018) is a snappy, Bob Fosse inspired, head bopper, co-written and produced by Grammy-nominated Rob Kleiner (Andra Day, Sia, Ceelo Green) in Los Angeles, CA. Already with an ESPN TV placement in the bag “Do It Right” is sure to turn some heads and with an album’s worth of new songs set for release, Nuela is geared up and ready to go.

Tell us a little bit about you? How you got started in the music industry?

My name is Nuela (new-ella) Charles. I am an alternative/soul singer songwriter based in Edmonton, Alberta. I was born in Kenya, grew up in Switzerland, Canada and the Bahamas and decided almost 15 years ago that I was going to become a musician of all things. It wasn’t until 2009, when I moved to Edmonton, that I decided to do it full time.

Tell us about your newest single “Do It Right” which was co-written and produced by GRAMMY-nominated Rob Kleiner. What was it like to work with him?

Working with Rob Kleiner was a great experience. It was our first-time meeting, and our first session together – so I definitely went in blind, but open. I really liked the projects that he has been a part of, and counted myself fortunate to have been able to work together.

If you could collaborate with anyone, who would it be?

At this very moment, probably Arctic Monkeys and Beyoncé.

What are you plans for the summer?

This summer I am wrapping production on my new project, playing some festival dates, and prepping to release a ton of new music in the Fall. Exciting times.

How was your experience at the JUNOS?

The JUNOS were amazing. It was my 2nd time attending, but the first as a nominee. My very first experience with the JUNOS was back in 2009 when I attended as a seat filler. So it was a pretty awesome experience being an artist this time around. There were so many different events that I was fortunate to be a part of, like the JUNO Cup Jam, and the CBC Playlist Live afterparty, where I was able to perform. It was also great getting to meet and perform with so many different amazing artists, like Kelly-Lee Evans, Terra Lightfoot, and Rose Cousins to name a few…there’s a lot, I could go on. So I am definitely looking forward to the next time I’m there …fingers crossed.