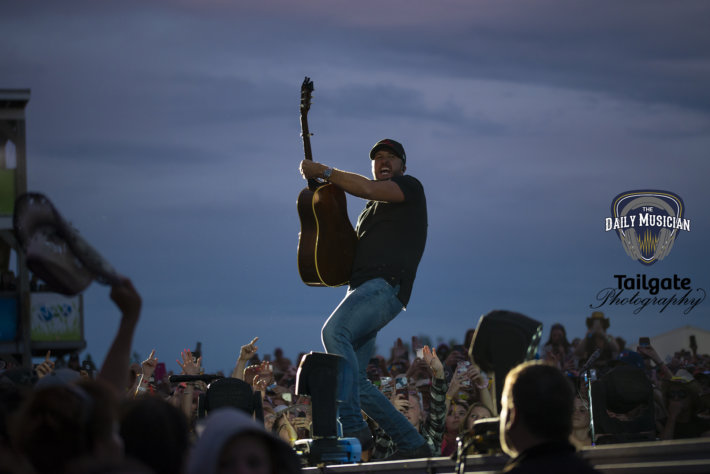 Spectacular, impressive and remarkable are only a few words to describe Cavendish Beach Music Festival this year. They had an amazing line up of artists including the most requested artist Luke Bryan who sold out the show on Sunday evening.

Friday started off with a bang literally when thunderstorms delayed the gates opening and rescheduling the first two performances on the main stage but the muddy field and threatening clouds didn’t stop all the fans that packed in as soon as the gates opened. Meghan Patrick kicked off the day with a great performance, she has serious guitar skills mixed with an incredible voice.

The Road Hammers were back at Cavendish this year and rocked the stage! The high energy and crowd interaction made for an incredible performance.

After their set the rain started again but that didn’t stop Chase Rice from coming out and putting on one heck of a show. Most of his set was performed in the pouring rain, him and his band were amazing. As he was getting close to the end of his set, the sun came out with a bright rainbow.

Brett Eldredge was Friday night’s headliner, his first time on the East Coast and did not disappoint. His set was fantastic with a great backdrop.

On Saturday the sun was shining, we had interviews lined up all available to listen below.

Saturday, all 3 stages were filled with many talented artists from all over. EmiSunshine kicked off the main stage performers at 1 pm. She has a fire in her soul for music, her voice is absolutely phenomenal. The East Pointers and Lindsay Ell followed, both with fantastic performances.

It was Terri Clark’s first time at Cavendish Beach Music Festival and saying her performance was a huge success is an understatement. She was incredible but that’s no surprise, Terri is being inducted into the Canadian Country Music Hall of Fame this year during CCMA week.

Dallas Smith opened up for Saturday night’s headliner Chris Young and all I can say is WOW. We have caught two of Dallas’ shows last year and it is no wonder why he has 4 CCMA nominations for  Apple Music Fans’ Choice Award, Male Artist of the Year, Single of the Year and Video of the Year.

My favorite part was when Terri joined Dallas on stage for their song “One Drink Ago”. I can’t wait for Terri to release her new album this fall.

Sunday…. well what can I say, for their 10th anniversary Cavendish wanted to make it one to remember and that’s exactly what they did. Luke Bryan has been the most requested artist that people wanted to headline CBMF and they had a sold out crowd.

On the main stage Sunday performers were Jimmie Allen, Petric, James Barker Band, Granger Smith, Jon Pardi and Luke Byran. They were all incredible. Luke had his family sitting to the side of the stage during his set, he performed until 11:30 pm.

CBMF added a 4th day for their 10th anniversary and went in a little bit of a different direction. They had on the main stage New City, Broods, Dan + Shay and headliner Shawn Mendes. It was successful. As soon as the gates opened people started running for the front of the stage.

Over all CBMF 2018 was a HUGE success, they celebrated their 10th anniversary perfectly and we can’t wait to see what next year will bring!

Here are some of our photos as a recap: