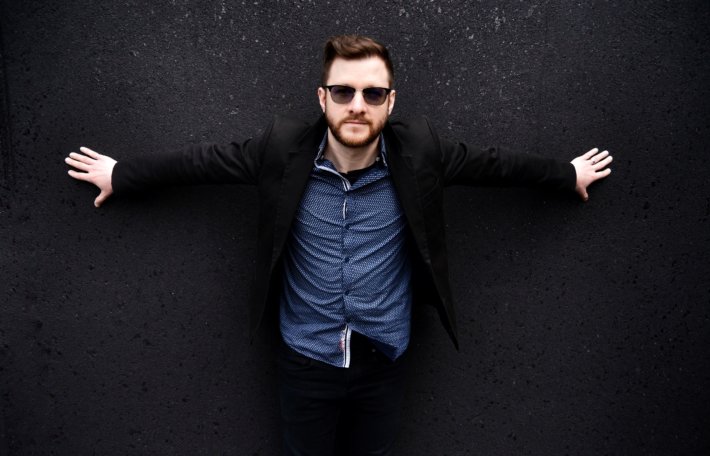 Meet Chris Kirby. But, do we really need an introduction? Well, it has been a while. The last album for the Newfoundland soul man, Wonderizer, came out way back in 2012. However, if you’ve had your ears open to East Coast music over those past seven years, you’ll certainly know his work. His hands, words, and production skills are all over much of your favourite music.

It’s time once again for Chris to come out from behind the curtain. What Goes Around is a collection of 11 funky, soulful and sizzling Kirby originals, plus one very special cover. He’s brought together his friends and heroes, all the great musicians he’s been working with the last few years, for the record he’s been aching to make. Thank goodness he finally found the time.

I had the chance to chat with Chris about his new single, upcoming album release and more. Here is our interview:

I’m from a tiny town in Newfoundland called Norris Arm. I moved to St. John’s to study Electrical Engineering, and quickly found myself living a double life…Engineer by day, musician by night. I “retired” from Engineering a few years ago when music got so busy that I didn’t have time for my day job anymore. These days I have been writing with some of the best (Matt Andersen, Tim Chaisson / The East Pointers, The Once, and on and on..), producing records for some great breakout artists such as Newfoundland’s Quote the Raven and Chris Ryan, and I have also spent a lot of time on the road playing keys and guitar for Matt Andersen and other fantastic artists.  After 7 years of working being the scenes as writer/producer/sideman, I am finally releasing a new record of my own, and I couldn’t be more excited.

This song is the only one on the album that I wrote alone. I think it represents me as an artist pretty well – I’m playing most of the instruments, and the lyrics are full of as much word play and wit as I could fit into 3.5 minutes! It’s very influenced by Sly & the Family Stone, Prince, and D’Angelo. I was listening to a lot of those artists when making this record. If I had to describe the song I would call it funky, sexy, and fun. The song is available on all streaming platforms. If you check it out / follow me on Spotify, you will also find that my tour dates are there! So please do that!!

It’s my first studio album in 7 years, and in making it I got some help from a bunch of talented friends: Shaun Verreault (Wide Mouth Mason) cowrote some songs and played some guitar on the album, as did Ian Janes. Charlie A’Court sang, Ian Sherwood played Saxophone, Keith Mullins co-wrote songs and played percussion. There are so many more friends who had a hand in either writing or performing: Damhnait Doyle, Cory Tetford, Gordie Sampson, Dennis Ellsworth, and on and on. There’s even a song written and performed with my wife, Victoria Howse. The core project was recorded at home in Newfoundland, with my brother Michael recording, and my long-time band The Marquee (Craig Follett and Mark Marshall) playing. Marquee alum Chad Murphy also returns for a guest appearance.

We are having a special advance release show in Halifax on July 4 at the Carleton. Tickets are available either through my website (chriskirbyonline.com) or thecarleton.ca. The show starts at 9pm with a set from Lockdown Trio (Me, Kim Dunn and Geoff Arsenault), then Ron Hynes will join us on bass and we will perform the new album top-to-bottom. We also have an all-star list of guest performers, including Matt Andersen, Charlie A’Court, Ian Janes and Ian Sherwood.  This will be the first time anyone will get to hear the album, and buy it in physical form. It won’t be released on streaming platforms until September. I will also be doing an advance release show in St. John’s, NL on July 28 at the Jag Hotel. Details for this show are also on my website.

For this album specifically, I dug deep into groovy Soul and R&B. You’ll find hints of D’Angelo, Sly and the Family Stone, Prince, Stevie Wonder, Aretha Franklin, but also influences from new-age heroes like Bros. Landreth, Bahamas and Vulfpeck.

I would just like to communicate how fortunate I feel in this moment. This business is hard. Really hard. I’ve been slugging it out since 2001. In recent years I have been lucky to work with many of my personal music heroes, and I find myself in demand as a behind-the-curtain music industry person. I never for a second take for granted the fact that I get to make music every day for a living. I have been in the background for nearly a decade, and it is truly exhilarating to know I can make a new album, have so many talented friends involved, and then have so many people excited to listen to it after all these years. I have a great group of people around me, including my wife Victoria, countless musical collaborators, and the amazing Glenn and Tim at Sound of Pop publishing. I would like to thank these friends and also fans for keeping me going. As long as you keep listening, I’ll keep singing.