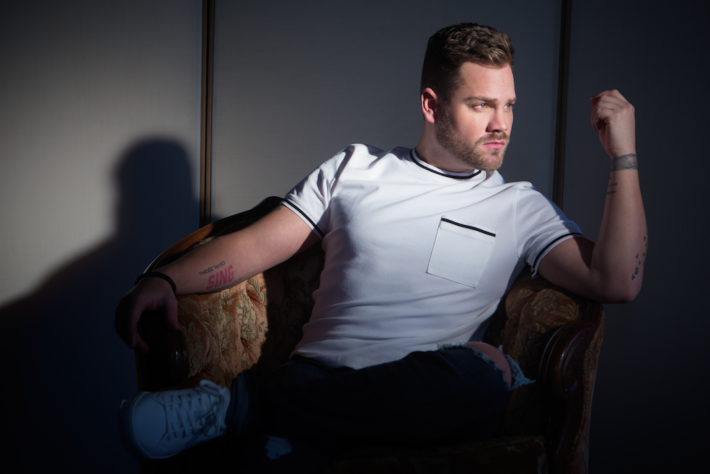 Theo Tams grew up in the small town of Coaldale, Alberta, into a strict and Reformed Christian Dutch family. He sang in church and at home had access to a music cabinet of mostly sacred music. At 16, he started writing original music and three years later recorded an EP, influenced by Sarah McLachlan, The Script and Jann Arden. Nine months after he came out to his parents, Theo landed a spot on Canadian Idol in 2008 and eventually won what would be the show’s final season. He released his debut full-length, Give It All Away, in 2009  and eventually worked with Slaight Music for his EP, Back Pocket.  Although Theo has already had a successful career, he has used his experiences to fully develop his creative vision for his upcoming EP Call The Doctor due out this September.

I had the chance to interview Theo, get to know him a little better and find out what is next for him below.

Q: First of all, tell us a little bit about you?

A: I was born and raised in small town southern Alberta but have been in Toronto for a decade now and it definitely feels more and more like home. When I’m not in the studio writing, or out performing somewhere, I spend a lot of my time in the kitchen, I love to cook- it helps me relax haha. I love to travel and see new places as well, always up for an adventure.

Q: Who were some of your music influences?

A: I listened to a lot of the Canadian songstresses in the 90s. Jann Arden, Sarah Mclachlan, Alanis Morisette, etc. More recently, the music coming out of the UK, Adele, Sam Smith, Ed Sheeran; all such beautiful story tellers- I love them all.

Q: Tell us about your new single “Strangers” that you have just released?

A: I wrote strangers with Gautier Marinof in Montreal (he also produced the upcoming EP as well) and it was a really easy song to write. Some songs are just like that, I think we had the entire song written in about an hour or so. It’s a bit of an exploration into some new sound for me, starting to play with some soul and RnB vibes, but still maintaining a level of intimacy lyrically. I’m really proud of it and it’s a great song to sing a long to!

Q: Who is someone you would like to work with whether it’s sing, perform or write with?

A: Such a touch question! Working with Jann Arden would be amazing, her lyrics are always so amazingly well written. I’d love to do a duet with Kelly Clarkson one day, she’s gotta be one of the best vocalists out there and it would be so fun to just SAANNNG with her haha.

Q: How did you get your start? and tell us a bit about winning Canadian Idol.

A: I wrote and released an EP a couple years before I was on Idol and was trying to make some moves in the industry before being on the show. I auditioned for Idol in 2008 and ultimately ended up winning what would be the last season. It was a really incredible experience, but for me, it was a more of a personal thing than anything to do with music. I ended up coming out on the show, so I’m really thankful that I was able to do that while being surrounded with so much love and positivity, and the distraction of singing on TV in front of a country kind of was a welcomed distraction haha. It is a bit of a double edged sword, it has opened a lot of doors for me but in some ways it’s also closed some. It’s been hard to break that stigma that I’m just an “idol kid”- another reason I’m so excited and proud of this new EP- it really speaks for itself and I can’t wait for people to hear it.

Q: What are your plans for the rest of the year?

A: Always writing and recording and creating- that’s a huge focus. Other than that, we are gearing up to launch the EP in September and putting some tour dates together for the late fall.

Q: What is on your current playlist?

A: so much good music is out right now; loving Sam Smith, Adele is always on rotation, also really enjoying Julia Michaels and Troye Sivan; they’re both such great writers.

Q: Do you have anything else you would like to add?

A: I think just stay tuned 🙂 It’s been almost 4 years since my last album, and I’ve done a lot of growing up, not just personally but musically as well. All that growth and change is really reflected in this new project and I can’t wait for people to hear it and experience it with me. That’s what it’s all about for me- allowing people to be a part of me and my music. I can’t wait!