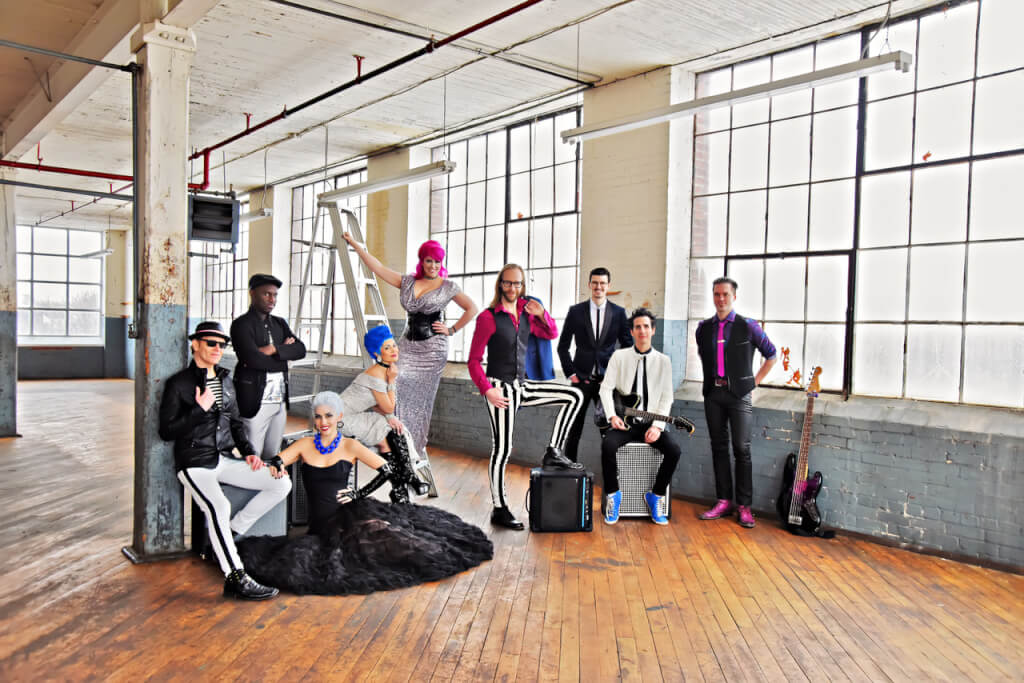 We had a chance to interview The PepTides before they kick off their Maritime Tour.

Jenn: You released a self titled EP in September 2016 with your single “Don’t believe in love” airing on the radio coast to coast in Canada and charted in the Earshot top 50. Do you have any plans to release new music in the near future?
The PepTides: We don’t have a specific release date yet, but we are currently writing for our next album. The album is loosely based on Kurt Vonnegut’s novel Galapagos. It’s a good unifying thread because the book features all the things we like to sing about: humour and humanity, apocalypse and war, evolution and… uh… reproduction.

Jenn: How did you get together?
The PepTides: The PepTides began as a studio project that turned heads locally in 2010. The Ottawa Jazz Festival offered The PepTides a gig in 2011, which was great… except there was no band. So an open call for musicians was issued, and the resulting nine-member group (five singers, four instrumentalists) is virtually unchanged since then.

Jenn: What does your band name mean to you?
The PepTides: The name The PepTides is a nod to neuropeptides—the hormones and other transmitters that are responsible for what we find most fascinating about the human species: addiction, love, and our fascination with shiny things.

Jenn: Can you describe your unique style of music?
The PepTides: Our music is as eclectic as our members. It has elements of disco, funk, soul, jazz and even baroque—all united under the pop banner. All nine of us really appreciate harmony, so we tend to incorporate tons of layering with two, three, four and even five parts at once. We like to write lyrics that make people laugh, dance, and ponder all at the same time.

Jenn: What is the craziest thing that has happened to you on tour?
The PepTides: One time we were singing and dancing in jubilation at a friend’s house after a show in Guelph. Several hilarious things happened that night! At one point Andrew started tinsmithing or making chainmail or something (we’re a little fuzzy on the details, but there were definitely medieval hand tools involved), DeeDee created a slick surface on our makeshift dance floor by spilling an entire bottle of hairspray, and Dale randomly emerged from the basement clothed in a found Pikachu costume with a bottle of wine comically placed in the lower tummy pocket.

Jenn: In 2013 you produced a full length album in collaboration with Stuart McLean of CBC Radio’s Vinyl Cafe. What was it like to work with Stuart?
The PepTides: It was an honour and an inspiration to work with a celebrated Canadian icon. As with all brilliant people, there is more to Stuart than meets the eye. Behind the brazen radio voice is a man who is quiet, shy, and tender. He cared deeply about children, strangers on the street, artists, mothers, neighbours, and dogs. We try to emulate this care wherever we go.

Jenn: Who are some of your musical influences?
The PepTides: We’ve been inspired by The B-52s, Scissor Sisters, The Beatles (who hasn’t?), Hair: The Musical, Nina Simone, Prince, Burt Bacharach, and more recently Pentatonix (another group with five singers).

Jenn: What is on your current playlist?
The PepTides: Today we have Red Hot Chili Peppers, Janelle Monáe, Tank and the Bangas, Bruno Mars and Old Man Luedecke (a proud Nova Scotian).

Jenn: Is this your first time touring the Maritimes?
The PepTides: We played at the Fredericton Playhouse back in 2012. But this is our first multi-date East Coast tour, so we’re really excited to make some PepTides history with Maritime music lovers!

Jenn: We look forward to meeting you in Halifax. Is there anything else you would like to add about your upcoming tour in June?
The PepTides: We’re looking forward to meeting you too! We’ve always felt an affinity for the East Coast, and we’re excited to present our show. Come one, come all, come as you are. At a PepTides show, there is no such thing as the “wrong” jeans, the “wrong” hair, or the “wrong” anything. All are welcome. All are accepted.

You don’t want to miss out on their concert. Below is their schedule. Look for a full review and photos from their Halifax stop on our website.