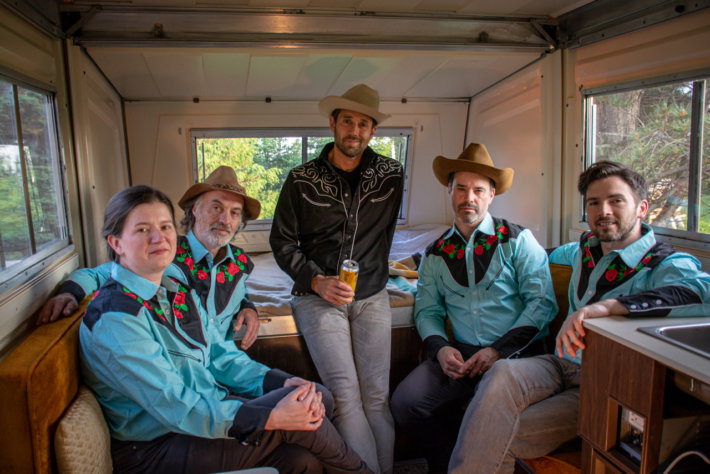 Eclectic country-western and swing ensemble, Ryan Cook & Sunny Acres featuring a Tribute to Buck Owens and the Bakersfield Sound will perform 14 shows throughout the Maritimes this fall, September 20 until November 23.

1) You are kicking off your “Buck Owens Tribute” tour on Friday. Can you tell me about that?
Got the itch to produce a show celebrating the music of Buck Owens, inspired by the podcast Cocaine & Rhinestones episodes 10 & 11 called “Open Up Your Heart – Buck Owens & Don Rich”. I always remembered Buck growing up, watching him on Hee Haw reruns at my grandparents house. I knew he was a big name but never really dug into his whole catalog until I listened to this podcast. I went on a spree and discovered quickly he had one of the best all time country bands- The Buckaroos, and had over 21 #1 hits. It was more than enough to create a show with and I hadn’t noticed anyone else singing his music around the places I travel.
2)What made you choose to do a “Buck Owens Tribute” tour?

A lot of the above, and the instrumentation of his music. The pedal steel is my favourite instrument and this show features a LOT of steel guitar. It’s the type of thing that isn’t heard enough at live concerts in 2019, when it IS visible it’s very much a backing instrument in modern country. It’s most nostalgic sound of classic country music I can think of.

The second part of Buck’s music that is so appealing is Don Rich’s high harmony vocals which are heard throughout his catalog. It’s some really feel-good stuff going on. The songs’ are pretty forumalic so we decided to expand the show reaching into some of the cover songs Buck recorded and some of the stuff Don Rich sang on his solo records. We start each set with some of my original material so all in all I’d like to think it’s a pretty well-rounded show, and not just a tribute.
3) What was your summer like?

I moved to Charlottetown, Prince Edward Island on the East Coast of Canada. It was my first summer living on Prince Edward Island so it was indeed pretty unusual, pretty surreal, and well… pretty. I only wish I had spent more time enjoying summer while it was here as it really is a fleeting thing in Atlantic Canada.

4) What are your plans after your fall tour?

Nearly every winter for the past 7 years I’ve “snowbirded” or migrated south or far east and performed minimally in places like Florida, South Carolina, Taiwan, Vietnam, and Thailand, while catching up on writing and the administrative side of this bookings. I’d like to keep up with this lifestyle but it’s becoming difficult to keep up that pace while performing the other 7 months of the year and roaming constantly. I might travel, or a might stay in Atlantic Canada a bit longer as I have to finish up writing for my a new record and put out some new music.

I do have some international concert bookings for next Summer and plan to start touring again in Canada in May. This is also when I plan to put out my newest record which will be more of an acoustic songwriter record than the past albums which were fully produced.

6) Tell us something that your fans may not know about you?
I have been listening to a lot of hymns lately. I’ve been attending old various Baptist churches in my travels and have been drawn to the old glorious hymns in the same way I was drawn to classic country music a decade ago. I’m not sure what to do with this feeling at the moment. I’ve had thoughts of putting together an album of traditional gospel music but I’m not sold on it being a concrete idea just yet. I’ve considered writing with a gospel leaning but I can’t set my heart on that either yet.
7) Is there anything else you would like to share with us?

I’m honoured for all the attention and spins that my last album Having a Great Time received. It was truly unexpected and continues to blow me away. I didn’t realize at the time I was making a record that would become my favourite of the four albums I’ve released. I’m hoping for the same miracle next time 🙂

Oct. 25 Halifax, NS Bearly’s House of Blues as part of the