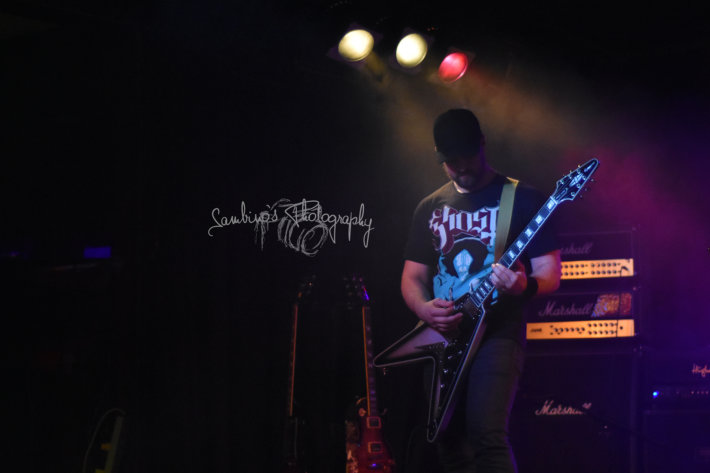 We had a chance to interview local band Shadow of Everest. Keep your eye out for these guys, they have new music coming out soon! Here is a little about them and what we can look forward too!

Tell us a little about you?

My name is JV, I sing and play guitar in Shadow of Everest. I consider us to be a groove metal band but it’s all under the rock n’ roll umbrella. I thoroughly enjoy making music and Shaun, Matt and Andrew are on the same page. We like to push on the walls of our previous constructs and see where we break out. That’s what our band is all about.

My top influences are Tool, Mastodon, Black Sabbath, Led Zeppelin and Pink Floyd. I really dig a lot of music and there are little pieces of songs that jump out at me and inspire me to write something.

How did you get started in the music industry?

Well I started playing guitar when I was 12. That isn’t really the “music industry” but I wrote my first song when I was 14. It wasn’t until after college that I started working with other songwriters and collaborating to build a catalog and perform those songs. I guess my start was just like any other; I started a band and when we had 30 minutes’ worth of music we called around, found some bands who would let us play on the bill and away we went. I’ve been playing in originals projects for almost 10 years now.

What is on your playlist these days?

Always Mastodon. I’ve been listening to a new record by a band called The Absence. The album is called A Gift for the Obsessed and it’s fantastic. A little Ghost. Puscifer. I’ve also been revisiting Opeth’s discography.

What are your plans for the summer and fall?

We have some festivals lined up over the summer and some shows in addition to our upcoming tour of HRM (which is really just Halifax and Dartmouth…sorry Sackville and Bedford. Next time!). You can catch us at Riverfest and Yesfest as well as the Support Local Music festival in September. Follow us on Facebook or Instagram for updates on all of those shows.

If you could work with anyone in the music industry, who would it be?

Two guitarists I’d love to work with would have to be Adam Jones (Tool) and Bill Kelliher (Mastodon). Their playing styles are really gripping and I could probably learn more from them in an hour than I have in the last decade of playing. There’s another really talented musician by the name of Mick Gordon who I’d like to collaborate with. He made some video game soundtracks that are unbelievable. Look him up.

Is there anything else you would like to add?

We’ve been working on finishing up some new music. We’ll be playing the more polished stuff over the summer and we hope to get into the studio along the way to get another record out. Really big, powerful riffs and we think it’s going to be a great follow up to Idle Hands. We’re really excited to get it out.