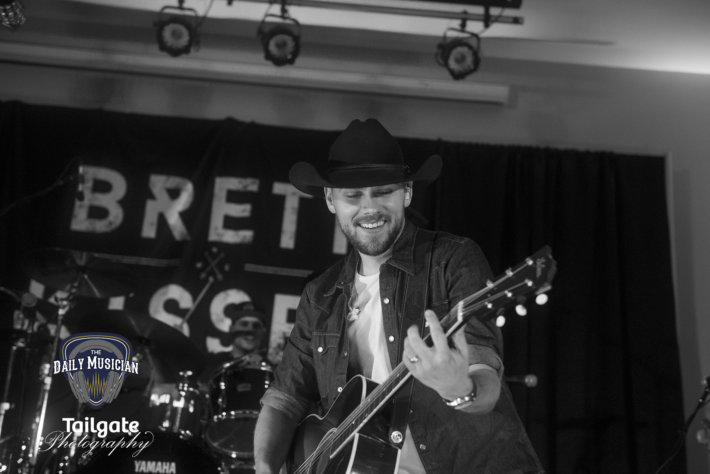 Brett Kissel has been touring across Canada with his huge “We Were That Song Tour”. He chose Port Hawkesbury and Glace Bay as his two Nova Scotia stops. Brett said during his 8 pm show in Port Hawkesbury that he heard the show sold out within an hour of the tickets going on sale, prompting an additional show at 3 pm the same day.

We attended both shows on October 8th and both shows ended up being sold out. His fans travelled from all over Nova Scotia to attend this show. First off, have you ever been to a Brett Kissel concert? If your answer is NO, you need to find out when he is coming to a city near you and GO. You will not be disappointed.

Brett has a huge heart and is all about his family and his fans. On a personal note,  my family endured two huge losses last year within a month of each other, it hit my mother hard as it was her husband and mother whom both lived with her. I introduced my mother to Brett Kissel’s song “Tough time don’t last, Tough people do” not only because it is an incredible song but it was helping me through this situation. I contacted Brett a few days before October 8th to see if he would help me surprise her with a meet & greet. He not only met her, he wrote those exact lyrics down for her to frame along with two photos as a gift to her. When I say Brett will do anything for his fans, he honestly does.

Before hitting Nova Scotia, Brett performed a few shows in New Brunswick where he surprised Woodstock High School by stopping by during the day and performing for them. The school has been grieving the tragic loss of a grade 12 student and he wanted to lift their spirits. That is something the students will forever have in their memories.

Dan Davidson is on tour with Brett, and those two together make it one heck of a night. Dan gets the crowd fired up with “Barn Burner”, “Cinderella” and even “Cotton Eyed Joe” to name a few. The energy he has on stage and the voice behind it makes his performance so incredible.

Brett comes out to “We Were that Song” and gets the crowd going wild. It started as a seated show, but within 5 minutes he had everyone on their feet dancing and singing along to every one of his songs. He sang some of his older songs, current songs and a brand new one he wrote, he wanted to try it out with us and it was phenomenal. During his set, Brett always does a mash up of covers. I always look forward to his Garth Brooks cover. However, on Monday his mash up included “Boot Scootin’ Boogie” by Brooks & Dunn; “Sold” by John Michael Montgomery; “I Swear” by John Michael Montgomery  “Callin’ Baton Rouge” by Garth Brooks; and last but certainly not least or forgettable was “Man, I feel like a Woman” by Shania Twain which included his band doing the dance to it.

Of course, he sang his last song walked off the stage and the whole entire room starts to cheer “Brett, Brett, Brett”, they come back on stage and perform another 3 songs ending with Dan Davidson joining him on “Ordinary Day” by Great Big Sea. Wouldn’t be an East Coast Kitchen Party without that song as Brett would say.

Brett is going to be back in the Maritimes on New Year’s Eve to perform 2 shows at Casino Nova Scotia. For more information or for tickets, visit http://www.brettkissel.com