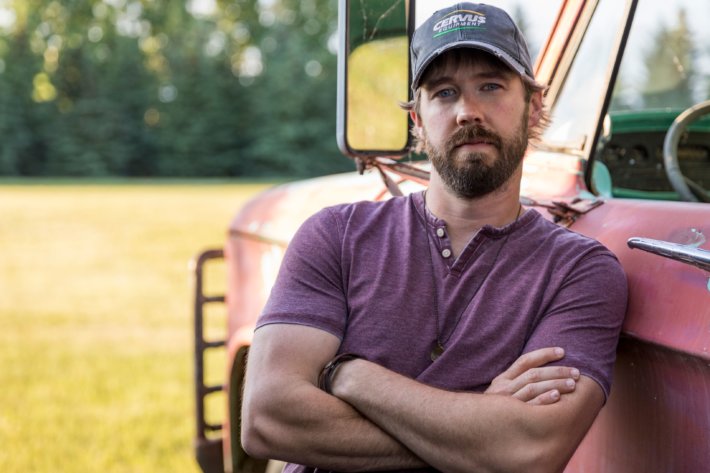 Gregory the singer is also Gregory the farmer – two sides of the same engaging, unpretentious and amiable coin, solidly rooted in the landscape and soil of his rural homestead. The music on his forthcoming EP Good Place to Start is as approachable as he is, something that also trans- lates on stage as he forms an instant rapport with any audience for whom he performs.

“It’s all pretty true-to-life stuff and I think that makes the music stronger and people react to it more wholeheartedly because they know I am singing about my own life and my own experiences, who likes the simple things in life, who likes to have a good time, just like the people listening to the music,” Gregory said.

Growing up in the small rural community of Standard, Alberta (population around 350) Gregory was exposed to music through local radio as well as from his dad’s extensive classic rock vinyl collection, and soon came to appreciate both the country and rock sounds that flowed through the family home. By the time he was 15 he had acquired his first guitar and from the first strum of the strings, he knew that making music was going to be a big part of his life.

Artists such as country megastar Eric Church, crossover artist Steve Earle and classic rock icon Bruce Springsteen were early influences, primarily because all three, regardless of genre, sing about real life, and about their own trials and tribulations, joys and sorrows.

Working with Kitchener, Ontario-based producer and multiple CCMA award winner Jason Barry over his last two recording projects, the veteran producer has proved to be an exceptional collaborator who intuitively understands the vision Gregory has in mind for his music.

“He wanted me to really dig deep and really figure who I was and who I wanted to be as an artist. We worked together on my last album and that was first time I really sat down with someone before we started recording to go through songs and try to really figure out what I was going for,” he said. The positive experience of working with Barry on his last two records has given Gregory more confidence as a songwriter. All seven songs on Good Place to Start feature his compositional skills alongside wonderful co-writers.

Better in a Bar about as down-home country as you can get, and is an anthemic party song, that is about the good times that can be had in your hometown watering hole with long-time pals, great music and perhaps a little bit of reckless abandon.

“I wrote this with Aaron Goodvin, who I have been writing with for quite a while, and it’s a song that really talks about how much better it is to expe- rience both the good times and the bad around people who care and support you. It’s about not wanting to sit at home and wallow but to get out and enjoy the company of good folks.”

The title track is a powerful, emotionally gripping song that was lifted by some of the more extreme, violent and shocking episodes of hatred that have been dominating the headlines, with the opening line referencing the murderous rampage that saw 58 people killed and more than 850 wounded by a crazed shooter at an outdoor country music show in Las Vegas on October 1, 2017.

Regardless of the success that has come, and which will undoubtedly continue to grow, he will always return home to his family farm, as it not only keeps him grounded, allows for replenish- ment of his soul and a certain amount of peace and solitude, but also continues to be the most essential aspect of his creativity. It’s where he continues to draw inspiration, and where he continues to learn life lessons, and perspective on what is truly important.

All of this is reflected in the music on Good Place to Start. Farmer, poet, entertainer and musical force – Drew Gregory is the epitome of the modern Canadian country music troubadour. We sat down with Drew during CCMA week in Hamilton, listen to our full interview below: