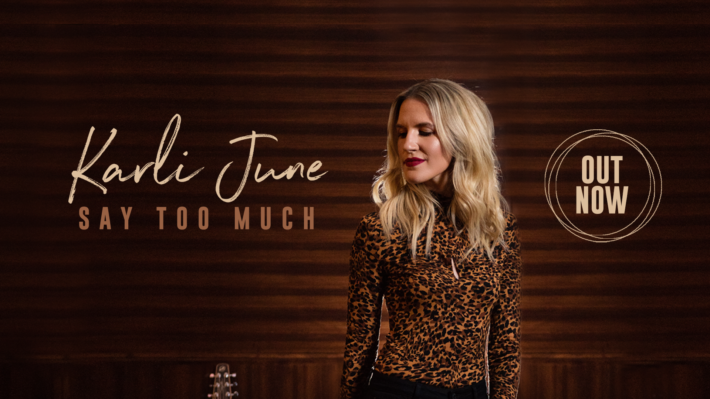 I had the chance to chat with Canadian country singer/songwriter Karli June. She just released her new single “Say Too Much” and has her debut EP coming out later this year.

Let’s start off by getting to know you a bit better. Tell me a bit about yourself?

I am 28 years old and I grew up in the small town of Listowel, Ontario. I was raised on a dairy farm and fell in love with country music there. I started singing in church at about age 7, and never stopped. It’s an honour to be part of country music, and I am so excited to be releasing music this year and to meet new people through it.

Your new single “Say Too Much” is getting ready to be released. Can you tell me about the song? What was it like to work with Scott Chesak?

Scott was amazing to work with. He is such a humble, kind person and not to mention incredibly talented. I learned a lot from watching him produce. He is a creative genius! I think seeing someone who has had incredible success and still works hard on each and every project is amazing. He also brought an entirely different element to this song having a background in pop production with Panic! at the Disco, and others. I think learning from someone who is going to hear things differently, and bring a whole other element to the table is when we grow the most as creatives!

You’re planning your debut EP this year, can you tell me anything about that?

I am beyond excited about this. I have been working really hard on just writing about things that are important to me: from things I’ve learned, to my upbringing on the farm and in my hometown, to love, and so many other things that have crossed my path over the years. I want to write from the heart because I think that is what connects with listeners the most – and I am so excited about a project that I feel truly captures that! I can’t wait for the other songs to come out. Lots to look forward to!

You have done a few festivals and opened for Terri Clark & Chuck Wicks. What have been some of your favourite moments so far?

Yes I have been very blessed with some incredible opportunities so far in my career! I thank God for every time I have had the ability to get up and play, and to be inspired by the artists I have had the honour of opening for. Playing Boots & Hearts in the Emerging Artist Showcase was a dream come true. The fans were so excited about every single artist. I had been to the festival before as a fan, so getting to play it has been a highlight of my career!

What are your plans this summer?

I hope to be out playing as many shows as I can. I also hope to have another single out during the summer months!

To all my fans, thank you so much for the support. I can’t wait to get to meet many of you in the days to come!