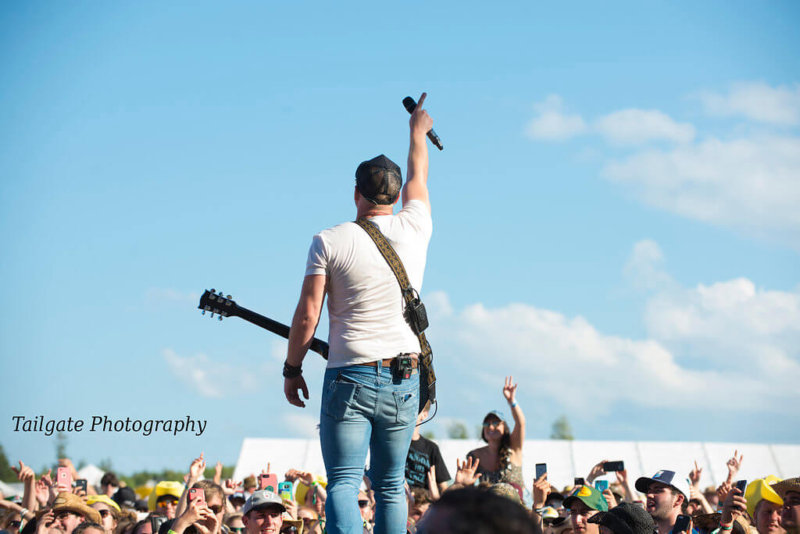 Day one of Cavendish Beach Music Festival is over and we can say it was an amazing day! The lineup on the main stage was phenomenal from Port Cities, The Good Brothers, Brandy Clark, Gord Bamford, High Valley to the finale of Little Big Town.
The Cavendish Farms Kitchen Stage and Sirius XM Emerging Artist Stage were full of talent, from local artists and beyond.

Gord Bamford brought a little girl up on the stage to sing and dance with him. She was 9 years old and has been coming to Cavendish Beach Music Festival for her whole life, all 9 years. She had the biggest smile, big pink cowboy hat full of artist signatures.

High Valley noted that they had the longest line for autographs in the merchandise tent at Cavendish and wanted to break their record this year! They ended their set by video taping the audience singing their song.
Little Big Town took the stage and the audience erupted into a loud sea of cheering! They put on an amazing set, a little rain didn’t damper the band or the fans.

At 5:00 pm Saturday, the field looked pretty empty, even near the main stage as Billy Ray Cyrus was starting his set. I have never seen so many people jam packed into the Cavendish Farms Kitchen Stage tent before. All you could hear was “Billy…Billy….Billy” from all the fans, and when he stepped on stage it was a huge roar of screaming fans. He had a hat on during his first song, after that he took his hat off to debut his new, fresh mullet as he started singing “I want my mullet back”. I think it is safe to say all the people at Cavendish Beach Music Festival were very happy to have Billy Ray Cyrus there. In my opinion next time, he should be on the main stage for a longer set.

Kane Brown was incredible. Not only did he put on an amazing performance but he got personal with his fans, telling personal stories about where he came from, things he went through; it made his songs relate to you in a different way, it gave them the personal touch.

The headliner was Kip Moore Saturday night. He came out, took a drink of Jack Daniels Whiskey and put on one hell of a show. Day 2 of Cavendish Beach Music Festival was a success.

All the main stage performances were incredible, I’ll highlight a couple. Aaron Goodvin had a packed field as he was shooting footage for his video “Lonely Drum”. He is a great performer.

Tim Hicks is always a good time. He comes out and just rocks his set. He gets the fans so worked up and excited, it’s one big party with him. When you come to see Tim live… You always have a Hell Raisin’ good time.

The final act of the night was Zac Brown Band. I have never seen the field so full. They rocked the stage for 2 full hours and said they want to come back.

Overall, We had a fantastic weekend, Cavendish Beach Music Festival never disappoints. Next year will mark their 10th year. You know this is going to be a big one, stay tuned for artists announcements as they come in.

To see some of our great photos being added daily check out our Facebook Page:
www.facebook.com/dailymusician